Swedish company Epicenter plans to embed a chip into about 150 workers, to allow bosses to monitor toilet breaks and how long they worked. 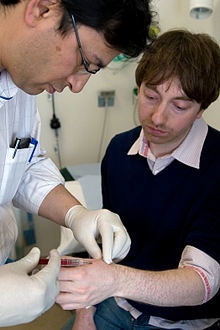 The workers volunteered for the free implant, which was the size of a grain of rice.

Some workers have already got microchips implanted in their bodies to allow their bosses to track their every move.

According to Patrick Mesterton, co-founder and chief executive of Epicenter, an innovation and technology company, who spoke to the Australian Broadcasting Company, the microchips inserted into employees' hands would simplify life.

With the radio-frequency identification chip, the employees would be able to open doors and use office technology like photocopiers and it could even pay for lunch at the office cafe.

''You can do airline fares with it, you can also go to your local gym  so it basically replaces a lot of things you have other communication devices for,  whether it be credit cards, or keys, or things like that.''

Mesterton told News.com.au: ''It's an implant in the hand that enables them to digitize professional information and communicate with devices both personal and within Epicenter. Once 'chipped' with this technology, members can interact with the building, with a simple swipe of the hand. Chips can also be programmed to hold contact information and talk to smartphone apps,'' he said.

The RFID (radio-frequency identification) chips are implanted using a syringe into the fleshy part of the recipient's hand.

According to commentators, the technology could involve a trade-off of a person's privacy in exchange for the convenience it offered.

According to Ben Libberton, a microbiologist from the Swedish thinktank and research organisation the Karolinska Institute, the data that could be accessed from the embedded chip was very different from the data found on a person's smartphone.