Global mining and commodities trading giant Glencore Plc has lost around 30 per cent of its share value yesterday hitting another record low on the back of fears of a slowdown in Chinese economy and the gloomy outlook for commodities in the global market. 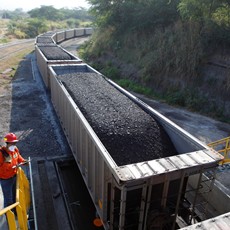 Shares in Switzerland-based Glencore, headed by billionaire Ivan Glasenberg,  suffered one of the worst trading days ever for a FTSE100 stock on Monday, dropping to 67 pence during the trading session, before closing 24 per cent down at 74 pence yesterday in London.

The company's market value has shrunk over 80 per cent since it was floated in London four years ago at 530 pence. The stock has plunged to below one-fourth of its value since the beginning of this year from around 300 pence.

The dive in share prices yesterday was accelerated by latest analysts' reports that the value of the commodities giant could ''evaporate.''

''If major commodity prices remain at current levels, our analysis implies that, in the absence of substantial restructuring, nearly all the equity value of both Glencore and Anglo American could evaporate,'' research firm Investec said in a note.

''We expect commodity markets to remain subdued for several years to come given that excess supply has coincided with a slowdown in demand,'' the firm said.

Other mining giants also suffered losses although less severe. Anglo-American lost 10 per cent of its value while BHP Billiton shed 6 per cent and Rio Tinto nearly 5 per cent.

Glencore has a hefty debt burden of $30 billion, which is nearly double its market value of $16 billion. It resorted to a $2.5-billion fund raising through share sale earlier this month to reduce its debt.

In 2012, the company shelled out $40 billion to buy mining giant Xstrata, whose products included thermal coal and base metals.

Glasenberg, whose holding in Glencore was over $9 billion on listing is now valued at hardly $1.3 billion.

According to some analysts, now there is every chance the merged operation could implode and could become the resources sector's very own Lehmann Brothers moment, a reason why investors are looking for an exit.

In addition to selling new shares, the company has also announced a series of cost-cutting measures, including sale of some of its valuable assets and suspending copper production at its operations in Zambia and the Democratic Republic of Congo.

The measures are expected to generate over $10 billion, which will be used to cut debts ''to the low 20 billions of dollars by the end of 2016'', Glencore said.