Sebi to look into Daigeo-Mallya spat over USL `non-disclosure' 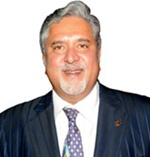 Market regulator Securities and Exchange Board of India (Sebi) and other regulators have started a review of the United Spirits Ltd-Diageo merger process amidst allegations of financial irregularities, including diversion of funds, by the company's board headed by chairman Vijay Mallya.

The USL board on Saturday alleged serious irregularities by the company, including diversion of funds to certain group companies as also other UB Group companies and lapses in financial disclosures, and pressed for the resignation of Mallya as chairman of the USL board.

The USL board has alleged that the company's funds have been transferred to some separately listed companies that are also part of the promoter groups.

Sebi is expected to look into all possible violations at USL and the role of certain individuals, including Mallya, as also at other UB Group entities. Simultaneously, the ministry of corporate affairs and accounting watchdog ICAI may also look into the allegations.

United Spirits Ltd (USL), in which Mallya-led UB Group has sold controlling stake to UK-based Diageo Plc, on Saturday asked Mallya to step down as chairman and director after an investigation by accounting firm PriceWaterhouse Coopers (PwC)  revealed fund diversion in the past to various UB Group firms, including the now-defunct Kingfisher Airlines.

Mallya has refuted all allegations and rejected the demand for his resignation. However, USL said its board has decided to go to the shareholders if he refused to step down.

Diego acquired a majority stake in USL in 2012 while the alleged Irregularities relate to transactions entered into by USL between 2010 to 2013 with UB group firms.

Some of the UB group entities are already under the regulatory glare for various violations, including about the listing norms, for failing to make mandatory disclosures.

The inquiry, which also involved PwC conducting a forensic probe, revealed that between 2010 and 2013, funds involved in many transactions were diverted from the company and/or its subsidiaries to certain UB Group companies.  (See: Diageo wants Mallya out of USL board over alleged `improprieties')