More than three shares advanced for every share falling on the BSE.
Nifty Midcap index was up 380 points or 2 percent.
All sectoral indices ended in the green, with PSU Bank index rising 5 percent. Metal was up 4 percent while Nifty Bank, Realty and Financial Services indices rallied more than 2 percent.
Canara Bank, Bank of India, Ujjivan Financial and L&T Finance Holdings rallied 6-10 percent.
Strides Shasun, Kwality and Adani Enterprises were down up to 4 percent.
3:26 pm Stock Advise: Ajay Srivastava of Dimensions Consulting advised selling only PSU banks on every rally
3:22 pm Expert View: Garima Kapoor, Economist, Elara Capital said in line with expectation, MPC maintained status quo in monetary policy. The recent softening in retail inflation that had firmed up during early months of winter, supported RBI’s decision to maintain status-quo. The recent moderation also supported a downward revision to RBI’s forecasts for FY19 CPI inflation.
"However, we expect headline CPI inflation to overshoot RBI’s forecast. We expect retail inflation to remain in the range of 4.7-5.6 percent in H1 FY19 (versus RBI's forecast of 4.7-5.1 percent) and 3.7-5.0 percent in H2 FY19 (versus RBI’s forecast of 4.4 percent)."
She said Elara believes factors such as the expected trajectory of food prices (following new formula for MSP revision), trend in crude oil and other commodity prices and outlook for South West Monsoon will remain key in determining policy trajectory.
It expects one rate hike of 25 bps towards second half of FY19.
3:20 pm PSU banks extend rally: Nifty PSU Bank index is up 3.7 percent. 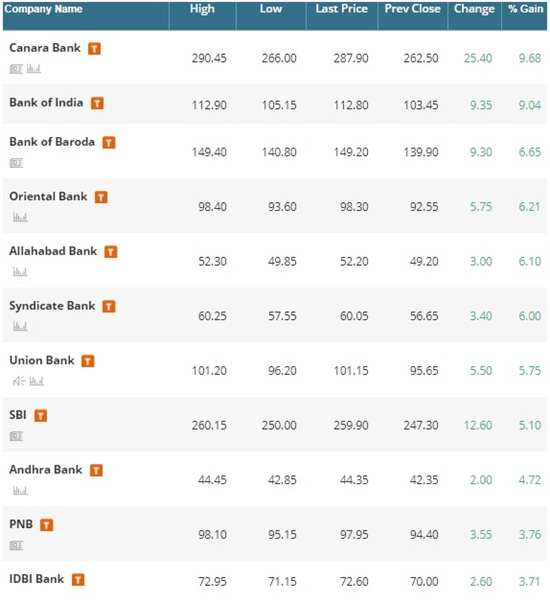 3:17 pm Market Update: The 30-share BSE Sensex was up 605.55 points or 1.83 percent at 33,624.62 and the 50-share NSE Nifty rose 196.90 points or 1.94 percent to 10,325.30.
3:15 pm Bond Yields decline: 7.17% 2028 government 10-year bond yield fell 1.36 percent to 7.195 percent after RBI Policy. Last month
3:12 pm Total turnover for the market stood at Rs 11.98 lakh crore.
3:09 pm Market Outlook: Motilal Oswal said markets have corrected very well and now awaiting there bounces in the corporate earnings momentum.
He thinks 10,000 on Nifty and 33,000 on Sensex are good levels to invest in the equity markets from the long-term perspective. "We will witness some turbulence, thanks to global trade fight, but subject to that volatility, these are good levels for retail investors to commit some money," he said.
3:07 pm Expert View: Motilal Oswal, Chairman & MD, Motilal Oswal Financial Services said as expected RBI Governor Urjit Patel left all key rates unchanged. It is imperative in the global scenario to hold the horses of reaction to rates.
Two continents are going to tighten the economy, in that situation to keep status quo is the best way, and observe the changes.
From the Indian context, we are at a reasonably good base rate and financial sector is now passing on the benefits of lower rates slowly, in the economy.
3:04 pm Market Update: Benchmark indices rallied further in last hour of trade, with the Sensex rising 571.31 points or 1.73 percent to 33,590.38 and the Nifty gaining 185.90 points or 1.84 percent at 10,314.30.
3:01 pm PE Investments: Investments by private equity and venture capital funds surged 60 per cent to a record high of USD 26 billion in 2017, while the bull markets helped register highest ever exits in a year, a report said.
The exits grew 60 percent to USD 15.7 billion with the public market being the preferred mode, consultant Bain & Company said.
Terming the year as a "strong year" for the private equity market, its partner Arpan Sheth attributed the rise to improving economic indicators, formalisation of the economy, and steps like passage of the bankruptcy law to address the non performing assets issue.
From a fund raising perspective, there was a 48 percent increase with India-focussed funds raising USD 5.7 billion, it said, with a bulk USD 5.1 billion being raised by alternate investment funds like those looking for assets in distress.
2:57 pm Realty Stocks on Buyers' radar: 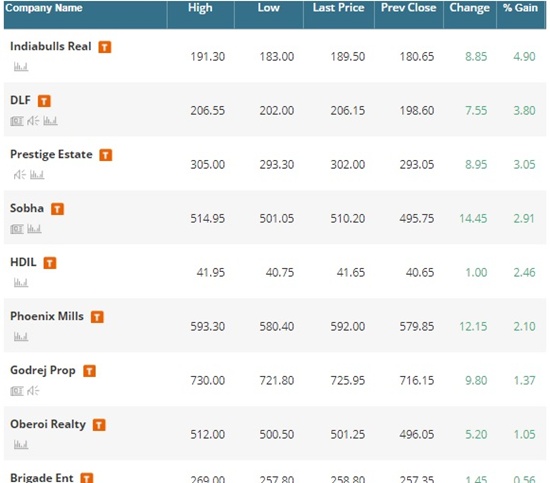 2:54 pm Market Update: The market extended rally after the RBI kept policy rates unchanged and cut inflation forecast.
The 30-share BSE Sensex was up 532.34 points or 1.61 percent at 33,551.41, while the 50-share NSE Nifty reclaimed 10,300 levels, rising 177 points or 1.75 percent to 10,305.40.
About four shares advanced for every share falling on the BSE.
All sectoral indices were in the green. Nifty Bank, Auto, Metal and Realty were up 2-4 percent.
2:50 pm  The next meeting of the MPC is scheduled on June 5 and 6, 2018.
2:47 pm Economic Growth: RBI said several factors are expected to accelerate the pace of economic activity in 2018-19.
"First, there are now clearer signs of revival in investment activity as reflected in the sustained expansion in capital goods production and still rising imports, albeit at a slower pace than in January. Second, global demand has been improving, which should encourage exports and boost fresh investment."
On the whole, GDP growth is projected to strengthen from 6.6 percent in 2017-18 to 7.4 percent in 2018-19 – in the range of 7.3-7.4 percent in first half and 7.3-7.6 percent in second half – with risks evenly balanced (Chart 2).
2:43 pm RBI said projected CPI inflation for 2018-19 is revised to 4.7-5.1 percent in first half of 2018-19 and 4.4 percent in second half, including the HRA impact for central government employees, with risks tilted to the upside (Chart 1).
2:41 pm Nifty Bank index gains nearly 2%: 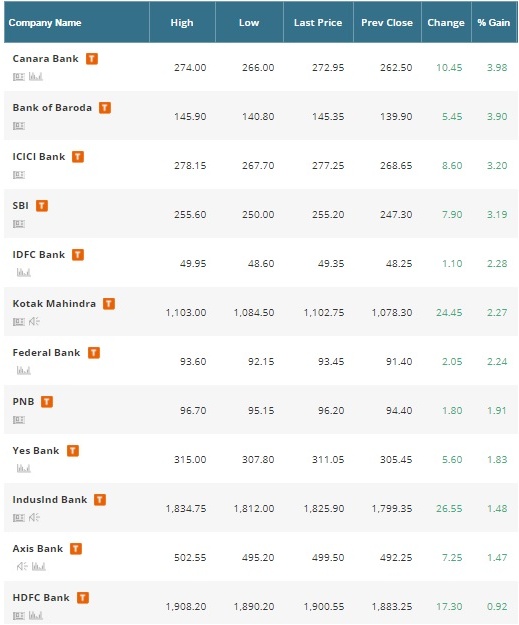 9:40 am Market Update: Dalal Street is on a strong footing as benchmark indices are up more than 1 percent following positive lead from global stocks and ahead of monetary policy committee meet outcome due later today.
The Sensex was up 353.42 points or 1.07 percent at 33,372.49 and the Nifty gained 116.40 points or 1.15 percent at 10,244.80.
Midcaps outperformed frontliners, with the Nifty Midcap index rising 1.5 percent on strong market breadth. About 8 shares advanced for every share falling on the NSE.
All sectoral indices are in the green, with the Metal, Realty rising more than 2 percent.
9:32 am Plant Approval: Shares of Indoco Remedies added 4.5 percent on accreditation renewal from Japanese regulatory authorities.
The company’s API plant at Patalganga has received accreditation renewal from the Japanese regulatory authorities.
The said accreditation is valid until May 21, 2023.
ICRA has revised the rating from AA- to A+ for the long term borrowing programme of the company.
9:23 am Market Update: Frontline indices extended gains, with the Sensex rising 383.96 points or 1.16 percent to 33,403.03 and the Nifty gaining 124.10 points or 1.23 percent at 10,252.50.
Apollo Tyres rallied 4.5 percent while Balkrishna Industries and MRF gained 3 percent.
The market breadth is very strong as about 8 shares advanced for every share falling on the BSE.
9:20 am Buzzing: Smartlink Network Systems share price rallied 14 percent as a meeting of the board of directors of the company will be held on April 07 to consider the proposal to buy-back the fully paid-up equity shares of face value Rs 2.
9:18 am Trade Deficit between India and US: The trade deficit between India and the US dropped by almost six per cent in 2017 compared to the previous year, the US Trade Representative (USTR) has said, even as it continued to harp on issues such as market access and high tariffs on several American products being imported into India.
"The US goods trade deficit with India was USD 22.9 billion in 2017, a 5.9 per cent decrease (USD 1.4 billion) over 2016," said the National Trade Estimate 2018 released by the USTR. India is one of the few countries with which US' trade deficit has decreased in the last one year.
9:15 am Market Opening: Benchmark indices bounced back sharply, tracking strong lead from global stocks and ahead of RBI monetary policy outcome.
The 30-share BSE Sensex was up 345.45 points or 1.05 percent at 33,364.52, and the 50-share NSE Nifty rose 112.80 points or 1.11 percent to 10,241.20.
Tata Steel, UPL, Yes Bank, Tata Motors, Bajaj Finserv, M&M, Eicher Motors, Grasim, Adani Power, Kotak Mahindra Bank, L&T, IndusInd Bank, ITC and SBI gained up to 3 percent.
Nifty Midcap index rallied 1.6 percent. Nifty IT was up 1.3 percent and PSU Bank rose 1.6 percent.
Future Consumer, Delta Corp, Edelweiss Financial, Jet Airways, Voltas, Natco Pharma, InterGlobe Aviation, Dilip Buildcon and Bhansali Engineering rallied up to 5 percent.
9:10 am Rupee Trade: The Indian rupee opened higher by 12 paise at 65.03 per dollar on Thursday versus previous close of 65.15.
According to ICICIdirect, the near-month dollar-rupee April contract on the NSE was at 65.33. The April contract open interest declined 5.99% from the previous day.
The research house expects USD-INR to meet supply resistance at higher levels. Utilise upsides in the pair to go short in USD-INR.
9:07 am Market Update: Benchmark indices extended rally in pre-opening trade, with the Sensex rising 270.49 points to 33,289.56 and the Nifty gaining 98 points at 10,226.40.
Jain Irrigation and Future Consumer gained more than 3 percent.
9:06 am Technical Recommendations: Moneycontrol spoke to ICICIDirect.com and here’s what they have to recommend:
Eicher Motors: BUY CMP – 28900.00 Target – 32200.00 Stop Loss – 27110.00 Upside – 11% Time Frame 6 months
Indian Hotel: BUY CMP – 136.00 Target – 166.00 Stop Loss – 124.00 Upside – 21% Time Frame 6 months
9:03 am Stocks in news: Adani Enterprises: The company has won an award from National Highways Authority of India (NHAI) for an infrastructure project in Chhattisgarh.
Natco Pharma: The firm has launched first generic version of oral tablets for multiple scerlosis in India.
Binani Industries: The company has offered to pay Rs 7,229 crore to lenders, creditors of Binani Cement, CNBC-TV18 reported.
Bharat Heavy Electricals: The company has begun 330 MW Kishanganga HEP In J&K.
Axis Bank: The central bank has rejected its request for gold & silver import in FY19.
Jet Airways: The airline will buy 75 Boeing 737 Max jets worth up to USD 9.7 billion.
IndusInd Bank ties up with JSW Foundation to support women athletes
Max Financial Services' board meeting on April 9, 2018, to consider and evaluate proposals for raising of funds by way of debt instruments
Kansai Nerolac entered into share purchase agreements (SPAs) to acquire 100% equity stake in Marpol for an aggregate consideration of Rs 36 crore
Bhansali Engineering Polymers board meeting on April 13, 2018, to consider audited financial results and recommendation of dividend to members for FY 17-18
Dilip Buildcon completed highway project and entitled to a maximum bonus of one annuity payment of Rs 177,300,000 for earlier completion.
9:02 am Market Check: Benchmark indices were higher in pre-opening trade, following positive lead from global stocks.
The 30-share BSE Sensex was up 73.53 points at 33,092.60 and the 50-share NSE Nifty rose 55.60 points to 10,184.
The SGX Nifty also indicated strong opening for the frontliners, rising 153 points to 10,283 on the Singapore Stock Exchange.
Tata Motors, SBI, Bank of Baroda, JSW Steel, JSPL, Tata Steel, Bank of India, UCO Bank, Allahabad Bank and Vijaya Bank gained up to 3 percent
Wall Street’s three major indexes staged a comeback to close around 1 percent higher on Wednesday as investors turned their focus to earnings and away from a trade conflict between the United States and China that wreaked havoc in earlier trading, Reuters reported.
The Dow Jones Industrial Average rose 230.94 points, or 0.96 percent, to close at 24,264.30, the S&P 500 gained 30.24 points, or 1.16 percent, to 2,644.69 and the Nasdaq Composite added 100.83 points, or 1.45 percent, to 7,042.11.
Asian shares bounced from two-month lows on Thursday as world equities recovered from a selloff triggered by escalating Sino-US trade tensions, with investors hoping a full-blown trade war between the world’s two biggest economies can be averted, Reuters reported.
Markets in mainland China, and those in Hong Kong and Taiwan are closed on Thursday.
MORE REPORTS