3:02 pm E-retailing growth: The booming e-retail market is likely to surge over twofold over the next three years, as players will be forced to shift their focus from discounts to consolidation, geographical diversification, business realignment and enhancing customer stickiness, says a report.

According to Crisil, going by the 2016-17 data, the e-retail market represents about 1.5 percent (Rs 70,000 crore) of the overall Rs 49 trillion retail sector in the country, indicating enormous growth potential. The online shopping segment has trebled over the past three fiscal years on rising Internet penetration, awareness of online shopping as well as lucrative deals and discounts.

2:55 pm Drug Approval: AstraZeneca's immunotherapy drug Imfinzi has won crucial approval from US regulators for use in lung cancer, opening up a multibillion-dollar market for a medicine that has so far lagged behind competitors.

The US Food and Drug Administration (FDA) said it had granted approval for expanded use of Imfinzi to treat non-small cell lung cancer (NSCLC) patients with inoperable mid-stage disease that has not spread widely around the body.

Imfinzi is the first immunotherapy to be approved in this setting and the company's shares rose 1 percent in early trade on Monday.

2:40 pm Market Update: Benchmark indices continued to trade sharply lower as all sectoral indices were in the red, with the PSU Bank falling around 4 percent.

Tata Steel stock was down over 6 percent but Bhushan Steel was up 20 percent. This after Moneycontrol reported that Tata Steel has emerged as the highest bidder for buying out Bhushan Steel.

2:25 pm MCLR Rate: Axis Bank informed exchanges that it has reviewed and decided to fix the 1-year MCLR at 8.40 percent.

"This reorganisation consolidates thermal and renewable energy businesses in India that are majority-owned by SCU under a single entity for synergy, with GEVPL becoming a 6.27 percent shareholder in the combined entity. Consequently, GEVPL is now not just an investor in a 2,640MW coal-fired coastal power complex, but also in a renewable energy portfolio of more than 1,400 MW," the company said.

1:54 pm Europe Update: Equities in Europe opened higher as global sentiment continues to rebound after a recent shakeout in markets.

The pan-European Stoxx 600 was 0.22 percent higher with most of the sectors trading in positive territory.

Asian stocks were up as many investors buy into stocks following the recent correction. However, Monday is set to be a low volume day with markets closed in the United States as well as Greater China and Mumbai due to public holidays.

Back in Europe, market players will be following further earnings and data releases.

1:45 pm Market Update: Benchmark indices continued to reel under pressure, with the Sensex falling 400 points and the Nifty trading well below 10,400 levels.

1:31 pm Dr Reddy's in focus: Dr Reddy's Laboratories today said its Chairman Satish Reddy, COO Abhijit Mukherjee and US subsidiary have been included as defendants in the class action lawsuit filed against it by investors.

Last year in August, the company had said "a law firm representing a purported investor in the company filed a purported class action lawsuit against the company, its CEO and CFO in the US District Court for the District of New Jersey alleging violation of the US federal securities laws."

Later on in November, the company said it was served a securities class action lawsuit in the US by the lead plaintiff.

"We would like to inform you that an amended complaint has been filed by the lead plaintiff, wherein our Chairman, COO and Dr Reddy's Laboratories Inc, a wholly-owned subsidiary in the US have been added as defendants," Dr Reddy's Labs said in a BSE filing.

1:10 Anti-Dumping Duty: The government is likely to impose an anti-dumping duty of up to USD 620 per tonne for five years on a chemical imported from China and used in pharma and fertiliser industries.

Alkyl Amines Chemicals had asked for an anti-dumping probe on 'Monoisopropylamine ' and imposition of levy to discourage cheap imports.

The Directorate General of Anti-dumping and Allied Duties (DGAD), the investigation arm of the commerce ministry, in its probe has concluded that the chemical has been exported to India from certain Chinese firms below its normal value, which has resulted in dumping.

The domestic industry has suffered material injury due to the dumping of the product, the DGAD has said in a notification.

About four shares declined for every share rising on the BSE.

12:38 pm Buzzing: Shares of Punjab National Bank (PNB) tumbled over 7 percent, extending the fall for a fourth straight session following the Rs 11,400-crore fraud at one its Mumbai branches.

In four trading sessions, the stock has lost nearly 28 percent and suffered an erosion of Rs 10,781.12 crore from its market capitalisation. 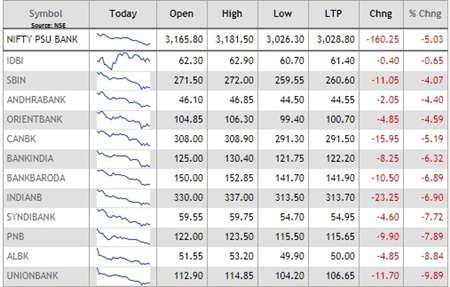 12:25 pm Market Update: Benchmark indices remained under pressure in afternoon, with the Sensex falling 204.22 points to 33,806.54 as all sectoral indices traded in the red.

Nifty Bank, Auto, FMCG, IT, Pharma and Realty indices were down 0.4-1.4 percent.

Ms Pankhuri also resigned as VP- Compliance and Company Secretary, and  Chandrakant Karkare as Chief Financial Officer of the company.

In four trading sessions, the stock has lost over 46 percent, wiping out Rs 344 crore from its market valuation.

11:50 am Banking Fraud: The CBI has registered an FIR against Rotomac pen promoter Vikram Kothari on the basis of a complaint from Bank of Baroda for allegedly swindling over Rs 800 crore, officials said here today.

The agency started searching his residence and offices in Kanpur from early in the morning, they said.

There were no arrests in the case yet, CBI spokesperson Abhishek Dayal categorically said.

He said Kothari, his wife and his son are being examined by the CBI, which is conducting the searches.

This is the second major financial scam to break out after the sensational Rs 11,400 crore fraud allegedly committed by billionaire jewellery designer Nirav Modi and his uncle Mehul Choksi, who is a promoter of Gitanjali group of companies.

The corporate affairs ministry has been looking into the affairs of Fortis Healthcare and Religare Enterprises after recent reports that financial irregularities have emerged at the two companies.

A senior ministry official said an SFIO probe has been ordered against the two companies.

The latest development comes against the backdrop of reports that the Fortis Healthcare's promoters -- Malvinder Singh and Shivinder Singh -- took at least USD 78 million out of the company without any board approval about a year ago. 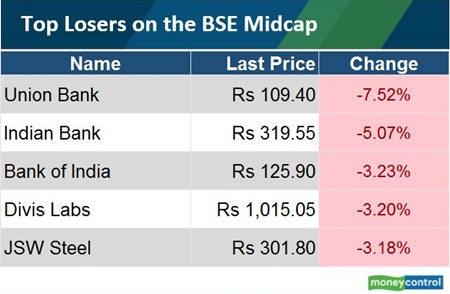 11:01 am Market Outlook: Volatility persisted on Monday with the Sensex falling over 200 points from the day's high. But, Ratnesh Kumar of BOBCAPS is not worried.

''I don't think we are at the cusp of a big correction. We have seen double digit earnings growth after many years and the momentum will only get better,'' Kumar, MD & CEO of BOBCAPS told CNBC-TV18 in an interview.

He believes the current momentum is a case of risk aversion coming off globally due to rate hike and oil price fears. ''Naturally, there will be a laggard performance in such cases among emerging markets,'' he told the channel, adding, the blip could be a temporary thing.

He feels the market is good for investment at this stage. Aggressive returns of 2017 may not be repeated, but on a 2-year basis, investors can expect positive returns, he said.

10:50 am Glenmark in Focus: Glenmark Pharmaceuticals, a global pharmaceutical company, presented findings from a Phase 2a study of GBR 830, an investigational anti-OX40 monoclonal antibody, at the 2018 American Academy of Dermatology (AAD) annual meeting in San Diego.

The GBR 830 Phase 2a study was a double-blind, placebo-controlled study in adults with moderate-to-severe atopic dermatitis (AD) that evaluated the safety, biological and clinical activity, and pharmacokinetics of GBR 830.

10:40 am Market Update: The market continued to trade lower, with all sectoral indices trading in the red.

The Sensex fell more than 100 points while Mid-Smallcaps are also under pressure, falling around a percent each.

10:30 am Buzzing: Natco Pharma shares rallied as much as 6.4 percent after the Mekaguda facility received zero observations from the US health regulator.

"....announce successful completion of regulatory inspection from the United States Food and Drug Administration (USFDA) for its active pharmaceutical ingredient (API) facility in Mekaguda Village, Hyderabad," the pharma company said in its filing.

The inspection by USFDA was conducted during the period February 12-16, 2018. 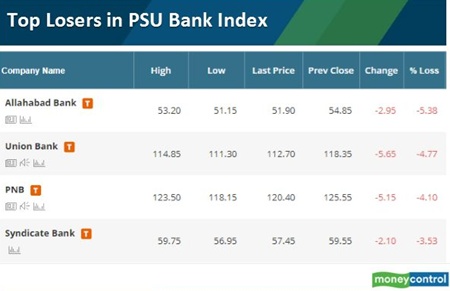 10:20 am Crude Oil Update: Oil prices extended gains to hit their highest level in nearly two weeks, buoyed as Asian shares joined a global recovery in equity markets and by worries over tensions in the Middle East.

Prime Minister Benjamin Netanyahu said on Sunday that Israel could act against Iran itself, not just its allies in the Middle East, after border incidents in Syria brought the Middle East foes closer to direct confrontation.

US West Texas Intermediate crude for March delivery was up 86 cents, or 1.39 percent, at USD 62.54 a barrel, after earlier touching its highest since February 7. 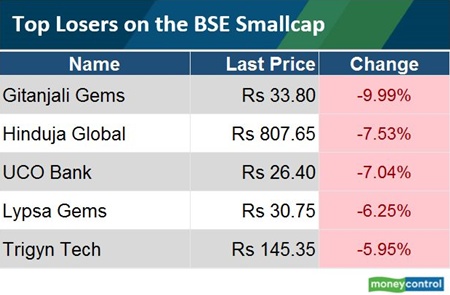 10:05 am Market Update: Benchmark indices extended losses, with all sectoral indices trading in the red.

PNB, India's second-largest state-run lender, said last Wednesday that it had detected fraudulent transactions worth USD 1.77 billion at a single Mumbai branch that had benefited "a few select account holders", and that it had reported the matter to law enforcement agencies.

UCO Bank, in a filing to the Bombay Stock Exchange late on Saturday, said its Hong Kong branch granted loans against letters of credit issued by PNB and was "fully confident" of receiving payment from PNB.

''We are delighted to have bagged this very prestigious order which has the potential to be a game-changer in the realm of water infrastructure development,'' said S Rajavel, Senior Vice President & Head – Water & Smart World Communication, L&T Construction.

9:37 am Buyback: KPR Mill scrip price gained nearly 6 percent ahead of board meeting to consider share buyback this week.

"A meeting of board of directors is scheduled to be held on February 22 to consider the proposal for buy-back of the fully paid-up equity shares," the textile company said in its filing.

"Further, in connection with the proposal for buy-back of shares, the period from February 18 to February 24 (both days inclusive) is to be treated as 'trading window closure period' for all directors and designated officers of the company to deal in the shares of the company," it added.

Tata Steel emerged as the highest bidder for Bhushan Steel with a surprise bid of Rs 35,000 crore. JSW Steel, which was the favourite till the end of the race, was second placed with a bid of Rs 29,700 crore. Tata Steel's stock fell around 5 percent intraday.

A senior bank executive aware of the development confirmed the allotment to Tata Steel and the bid amount.

9:21 am Navi Mumbai Airport: The City Industrial Development Corporation (Cidco), the nodal agency of Maharashtra government implementing the Navi Mumbai International Airport has set a stiff deadline of December 2019 for developer GVK Power & Infrastructure (GVK) to operationalise the first phase of the project.

As part of the first phase - Cidco expects the developer GVK Power & Infrastructure (GVK) to make one runway and a terminal building operational with a capacity to handle 10 million passengers by end of next year.

Gagrani said the company will be handing over the land to GVK in 6-8 months. "We took possession of 98 percent of the land," said Gagrani.

9:15 am Market Check: The market started off the week on a negative note, with the Nifty and Nifty Bank trading well below its Friday's low due to further correction in PSU banks.