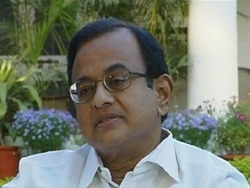 P Chidambaram, the then finance minister and the jailed former telecom minister A Raja had jointly determined the price for the 2G spectrum in 2008, according to a document filed by Janata party leader Subramanian Swamy before a bench of Justice GS Singhvi and Justice AK Ganguly of the Supreme Court.

An office memorandum sent to the Prime Minister's Office, prepared by the finance ministry headed by Pranab Mukherjee on 25 March 2011, also suggested that. Mukherjee had also seen the note sent to the PMO.

Swamy's contention is that the CBI, which is trying to nail the then telecom minister A Raja in the scam, is ignoring the culpability of the finance minister in the price fixation of 2G spectrum.

Swamy also pointed out that Chidambaram and Raja had four meetings on the issue of fixing spectrum price before the two had their final meeting with the prime minister.

The finance minister had suggested auctioning of the spectrum beyond the "start-up" level in his note to the prime minister on 15 January 2008, according to the documents placed by Swamy.

The finance ministry note also ruled out the option of auctioning spectrum for various reasons.

However, in a subsequent meeting on 30 January 2008 between Chidambaram and Raja, the finance minister said "he was for now not seeking to revisit the current regimes for entry fee or revenue shares," the documents showed.