Nepal has cancelled an agreement with a Chinese company to build one of the country's biggest hydro-power projects in what could be a setback to Beijing's efforts to expand its clout in Himalayan country through its 'Belt and Road' initiative. 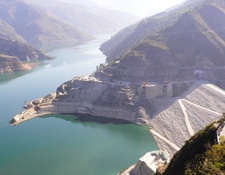 ''In the meeting of the board of ministers held today, the agreement with the Gezhouba Group in respect of Budhi Gandaki Hydro Electric Project was found in an irregular and thoughtless manner and rejected under the direction of Parliamentary Committee,'' he said.

In less than a month after Nepal formally agreed to take part in Beijing's ''Belt and Road Initiative,'' Nepal signed a memorandum of understanding with the Chinese state firm in June to build the 1,200MW hydropower plant, about 80km from Kathmandu.

The then energy minister Janardan Sharma and CGGC president Lv Zexiang signed a memorandum of understanding (MoU) to build the project under the engineering, procurement, construction and finance (EPCF) model. The agreement was signed in the presence of the then prime minister Pushpa Kamal Dahal and Chinese ambassador to Nepal Yu Hong.

Nepal is now expected to formally announce the cancellation of the deal with Chinese state-owned company, according to its deputy prime minister.

The agreement's cancellation is expected to be a major setback for Beijing as it seeks to expand its influence in the Himalayan country through the massive infrastructure drive.

Dinesh Kumar Ghimire, a spokesman for Nepal's ministry of energy, said the decision could be final since it was put on Twitter.

''This must be a decision made by the cabinet,'' Ghimire said, adding, ''Hopefully we will get an official announcement.''

Officials of the Chinese company said it has not been notified about the change, adding the original memorandum was expected to be turned into a formal contract next year.

Gezhouba, however, has two other hydropower contracts in Nepal. Chinese companies are also building hospitals, roads and airports in the country as part of the ''Belt and Road''

The Nepalese government led by former prime minister Pushpa Kamal Dahal signed up for Beijing's belt and road infrastructure initiative in May.

Sher Bahadur Deuba who took over as prime minister in June after Dahal's party lost in the elections, also said his government would respect liks with China.

In August, Deuba told visiting Chinese vice premier Wang Yang that his government remained committed to implementing past agreements, including those on the Belt and Road Initiative, according to The Kathmandu Post.

China and India have been vying for influence in the strategically important Himalayan nation, which also has great potential to generate hydroelectric power.

Nepal, however, needs a 'balancing act' to keep relations with the two neighbours.