Some of the biggest names in US power industry are tying up with Chinese companies to access the cash , equipment and technology on offer for China's fast growing energy sector.

The alliances struck by such energy majors such as Duke Energy Corp, AEC Corp and Progress Energy Inc could spell open sesame for Chinese companies that would not be possible otherwise because utilities still operate as monopolies across much of the US controlling their local market for power-production equipment and technology. 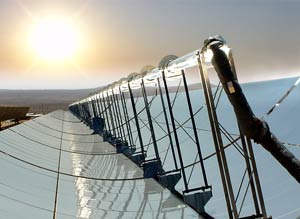 Since August, Duke Energy has entered into deals with two Chinese companies that operate in the fields of solar-power development in the US and methods to capture and store carbon dioxide from coal-burning power plants.

According to Duke chief executive Jim Rogers the deals are just the beginning and he may solicit Chinese financing for the $25 billion in capital Duke needs to raise over the next five years.

Many Chinese firms also have deep pockets and US utilities would have to refinance about $100 billion of debt falling due in 2011 and 2012. Moody's Investor's Service said last week that they would need to consider alternatives to 'traditional bank credit' which could remain constrained.