Venezuela looks to Opec, friendly nations as US tightens grip

Embattled Venezuelan President Nicolas Maduro has sought support from Opec and other friendly countries against US sanctions imposed on his country’s oil industry that in turn has impacted oil prices and production. 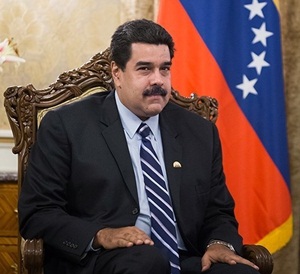 The United States, on the other hand, declared humanitarian assistance to the country which it tried to throttle and offered support to Venezuela’s self-proclaimed president, Juan Guaido, a US puppet who claimed he was the real leader of the country.
The US Agency for International Development (USAID) is reportedly planning to send $20 million worth of medical, food, and personal hygiene supplies which are currently being warehoused in the Colombian border city of Cucuta. The Venezuelan government has denied USAID personnel entry into the country, claiming that the aid is being used as cover for a foreign intervention to install Guaido in Miraflores presidential palace.
Venezuela’s oil minister and head of state-run oil producer Petroleos de Venezuela SA Manuel Quevedo, meanwhile, made a surprise appearance at an energy event in India, Petrotech 2018, as the beleaguered Opec producer sought closer ties with major crude customers in the face of crippling US sanctions.
Quevedo said the US sanctions have brought about a $20 billion loss to his country in lost oil sales and production cuts and is now looking to friendly nations to ramp up oil production and sales.
Following a ban on its crude by the Donald Trump administration and American refiners halted purchases, PDVSA is seeking to retain buyers in other big consuming countries such as China and India after. The US wants to get Maduro to cede power to an interim government led by Juan Guaido - a lawmaker who claims he’s the country’s rightful leader.
For cash-strapped Venezuela, India is a preferred customer as it pays in cash for crude unlike China, which follows an oil-for-loan agreement.
Following the US sanctions, Venezuela’s crude output nearly halved from 2016 levels to 1.3 million barrels per day in January.
Quevedo, who met Indian oil minister Dharmendra Pradhan on Monday, said his country’s production is now at 1.57 million barrels per day.
Venezuela, which currently holds the Opec presidency, has a “healthy relationship” with India, he said at the Petrotech conference.
“I have met the Indian oil minister, we are going to meet again,” Quevedo said. “We have a good relationship with India and we want to continue this relationship.”
India’s private sector refiner Reliance Industries Ltd that operates the world’s biggest processing complex, is taking some of Venezuela’s synthetic oil Hamaca that was originally scheduled for delivery to a LyondellBasell Industries NV plant in the US, according to a Bloomberg report.
More than 8 million barrels of Venezuelan crude is currently idling all over the Gulf of Mexico in an area that stretches from US coast to the Yucatan Peninsula in Mexico, according to cargo-tracking and market intelligence company Kpler.
Venezuela will need to make a lot more such sales to sustain its oil industry.
Guaido said the US is trying to wrest ownership of PDVSA’s Houston-based unit, Citgo Petroleum, away from the current regime. The move forms a key part of his strategy to topple Maduro and install an interim government that would call new elections. Guaido has said he plans to name a new board of directors for the state producer and its US subsidiary.
The U.S. wants to “steal Citgo from Venezuela,” Quevedo said on Monday. “Citgo is a Venezuelan-owned petroleum company. The United States is simply trying to eliminate competitors.”
MORE REPORTS