US oil giant ConocoPhillips is preparing to sell some or all of its North Sea fields in order to focus on shale operations in its home market, Reuters yesterday reported, citing industry and banking sources. 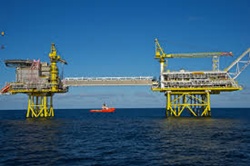 Thugh ConocoPhillips had tried to sell some of its North Sea assets in 2014,  it had failed so. This time it has not yet launched a sale process or appointed banks, the report said.
Executives at the Houston, Texas-based company are said to have recently met and spoken with several operators in the North Sea and with bankers to “gauge the appetite for the sale,” the report added.
ConocoPhillips has been operating in the UK and Norwegian parts of the North Sea for over 50 years.
The company’s assets include the Greater Britannia, J-Area, and Southern North Sea fields in the UK and the Greater Ekofisk Area in Norway.
ConocoPhillips also conducts exploration activity in both Norway and the UK.
In the UK, ConocoPhillips’s total production in 2017 stood at 75,000 barrels of oil equivalent per day (boepd), according to the company’s annual report.
Oil and gas companies are looking at shale gas in the UK as North Sea supplies dwindle.
Even as the debate over fracking hots up in the UK, the future of the energy source in the UK and Europe depends on a patch of ground in northwest England.
According to the British Geological Survey, Britain is sitting on shale gas deposits sufficient to meet the UK's requirement for 25 years. A 2013 report suggested an area stretching from Lancashire to Yorkshire and Lincolnshire could hold at least 1,300 trillion cubic feet of gas.
Scotland has banned fracking, while public opposition in the UK hit record highs and protests made headlines.
MORE REPORTS