The first-ever shipment of Russian gas to the UK looks likely to head straight back out on another ship – some of it likely for India - disproving Moscow's claims that Britain will be reliant on it for supplies this winter. 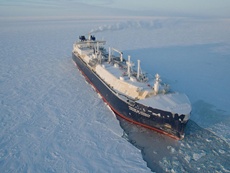 Russian media seized on the delivery of liquefied natural gas (LNG) to claim it would ''keep Britons from freezing this winter'' while the Russian embassy in the UK tweeted: ''Feeling cold? Help is on the way.''

National Grid confirmed that gas from a Russian field targeted by US sanctions had been delivered by a Russian icebreaker to storage facilities at the in Kent on Thursday night.

The Christophe de Margerie tanker docked at the London Thamesport on the Isle of Grain in Kent and offloaded its cargo.

But the shipment, estimated at 170,000 cubic tonnes, will only be stored in the UK before being sold elsewhere, rather than being used domestically, reports said. It belongs to Petronas LNG UK, the British arm of Malaysia LNG, Agence France-Presse reported.

However, industry experts said the most likely scenario was that the UK would simply be a stopping-off point for the gas, which could fetch a much higher price in Asia, according to local media.

Ed Cox, the editor of global LNG at the market intelligence firm ICIS, told The Guardian, ''I would urge some caution [on the idea Russian gas will be supplying the UK]. There's another empty LNG vessel outside the Isle of Grain now, which looks like it's going to come in and pick up that cargo.

''The [gas] prices are much more attractive in Asia and India than they are in Europe.''

Market sources had told ICIS that the LNG was expected to be picked up by the other ship, he added.

A spokesperson for National Grid said the gas had not entered the national network of pipelines that supplies homes and businesses.

Opened by Vladimir Putin earlier this month, the Yamal project is based in Siberia and majority-owned by Novatek, one of Russia's largest independent natural gas producers, which currently faces sanctions by the United States government over Russia's involvement in Ukraine.

Other investors include France's Total and the Chinese state-owned CNPC and Silk Road Fund.

The project is one of those affected by US sanctions against Russian energy projects, though not directly by UK sanctions.

The Christophe de Margerie is an icebreaker commissioned specifically to service the Yamal project, which is in north Siberian Arctic.  It is named after Total's former chief executive, who died in a plane crash in Moscow three years ago.

The ship's departure came after UK gas prices soared in mid-December when a major North Sea oil and gas pipeline was shut down after a crack was discovered. UK gas prices have since fallen back down to normal levels.