Saudi Aramco has signed five memorandums of understanding (MoUs) with Russian companies during the King Salamn's visit to Moscow, even as Russia proposes to sign a $3-billion deal to supply the S400 air defence missile system to Saudi Arabia. 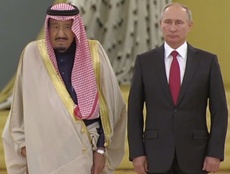 Ahead of the Saudi king's visit, Russian foreign minister Sergei Lavrov described the event as ''an historical moment'' while President Vladimir Putin at the summit on Thursday agreed, saying, this was a ''landmark event'' that would provide a ''boost'' to relations.

According to the Kommersant newspaper, an agreement has already been reached on a $3-billion deal to supply the Saudis with Russia's most advanced air defence missile system, the S400 Triumph. The deal will be signed at a WTO meeting at the end of October. There may be other deals forthcoming on aircraft and helicopters depending on the success of talks, the newspaper said.

''We have already established eight research centres around the world that complement our main research facilities in Saudi Arabia," Nasser said at a panel discussion at the Saudi-Russian Business Investment Forum in Moscow on the sidelines of Saudi royal's visit to Russia.

"Considering Russia's considerable strengths in science and technology, as well as highly talented researchers, scientists and engineers, we are exploring collaboration in R&D field. Considering the large oil and gas resources possessed by our two countries, we also have a common interest in strengthening oil's position and there are numerous to collaborate in these areas,'' he added.

An MoU was also signed with LITASCO, the Swiss-based international and marketing arm of Lukoil, one of Russia's largest oil companies.

The two other agreements were with Gazprom Neft for technology and R&D collaboration and training, and with the Russian Direct Investment.

Saudi Arabia has held talks with a dozen Russian energy companies and has formalised certain projects and plans for cooperation, Russia's minister of Energy Alexander Novak said in an interview with TASS.

"Minister of energy, industry and mineral resources of Saudi Arabia has already been to Moscow and St. Petersburg several times, he already had talks with around ten leading Russian energy companies and they already have certain developments, projects, plans for cooperation," he said.

"Yes, thanks to the agreement, we began to communicate more with each other, but continuation of our interaction does not depend on the extension of the deal. In addition to OPEC, we have an intergovernmental commission for trade and economic cooperation," he said, adding, the countries could get closer due to common interests, especially in the energy sector, as Saudi Arabia is interested in Russian technologies in oil production, oil exploration and services.

"We have mining, exploration and service technologies that are of interest to our colleagues. Now they mainly use services of international companies such as Schlumberger, Halliburton, Weatherford. Therefore, the more players on the market, the more obvious is the economic effect for consumers of these services," Novak said.

At the same time, according to the minister, Russia and Iran are already entering the first deals to buy Iranian oil, the mechanism of interaction is being finalised.

"We are already entering certain first deals, now the mechanism of interaction is being finalised," he said.

It was reported earlier that Russian Prime Minister Dmitry Medvedev and King of Saudi Arabia Salman bin Abdulaziz Al Saud intend to discuss joint investment projects at a meeting in Moscow on 6 October.

"The sides will also touch upon issues of bilateral cooperation in trade, economy, industry, energy, agriculture and other areas, consider implementation of major joint infrastructure projects," according to the press service of the Russian government.