US President Barack Obama on Tuesday announced a ban on new oil and gas drilling in federal waters in the Atlantic and Arctic Oceans, in what is probably his last push to save the environment from further degradation before Republican Donald Trump takes office next month. 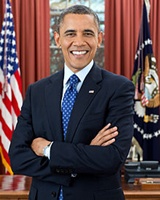 Obama leaned on the Outer Continental Shelf Act, a 1950s law that allows presidents to limit areas from mineral leasing and drilling, to outright banning drilling in the Atlantic and Arctic Oceans.

The incoming Trump administration, which is generally seen as environment not-friendly, would have to go court if it wants to reverse the decision, say environment groups. Trump, who succeeds Obama on 20 January, has said he would expand offshore oil and gas drilling.

Trump's energy policy team has in a recent memo said drilling the Chukchi and Beaufort Seas off the Alaska coast as well as the mid- and south Atlantic could increase oil and gas production.

However, energy companies have not been keen to drill anytime soon off the coasts thanks to abundant cheap shale oil in North Dakota and Texas.

Also, drilling in the Arctic is expensive and risky. Shell Oil ended its quest to explore in harsh Arctic waters in 2015, after a vessel it was using suffered a gash and environmentalists uncovered a law that limited its drilling (See: Royal Dutch Shell to end exploration in offshore Alaska). http://www.domain-b.com/companies/companies_s/Shell/20150928_offshore.html

The American Petroleum Institute (API), the oil industry group lobby, says the present ban can be easily overcome by Trump issuing a presidential memorandum to lift it.

"We are hopeful the incoming administration will reverse this decision as the nation continues to need a robust strategy for developing offshore and onshore energy,'' reports quoted an API official as saying.

Obama said in a statement that the joint actions "reflect the scientific assessment that, even with the high safety standards that both our countries have put in place, the risks of an oil spill in this region are significant and our ability to clean up from a spill in the region's harsh conditions is limited."

Canada will designate all Arctic Canadian waters as indefinitely off limits to future offshore Arctic oil and gas licensing, to be reviewed every five years through a climate and marine science-based life-cycle assessment.