India and Iran have agreed to conclude an agreement to develop the Farzad-B gas field in Iranian offshore within the next three months. The two countries also agreed to make their best endeavours to conclude the definitive agreement by February next year. 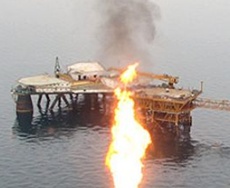 The announcement was made after an official level talks in Tehran between the petroleum ministries of the countries.

The Farzan-B gas field is estimated to have in-place reserves of 18.75 trillion cubic feet of gas, the Indian government said in a statement today.

A consortium led by ONGC Videsh Ltd (OVL), the overseas investment arm of Indian explorer Oil and Natural Gas Corp, discovered the Farzad B gas field in the Farsi offshore block in 2008.

But, further development of the gas field was hampered by Western sanctions on Iran against that country's nuclear programme. The consortium, which also includes Oil India and Indian Oil Corp, could not obtain permission to develop the field until those sanctions were lifted earlier this year.

OVL is preparing a master plan for development of the gas field, while also working on a pricing formula, the statement said.

India is the second largest buyer of Iranian oil after China, and New Delhi is seeking ways to deepen trade ties with Tehran now that sanctions have been lifted.

The two sides expressed satisfaction at the ongoing negotiations.

Joint secretary in the petroleum and natural gas ministry Sunjay Sudhir led the Indian side during the talks while Iranian delegation was headed by Dr Amir-Hossein Zamaninia, deputy minister of petroleum.

They discuss bilateral cooperation in the field of oil and gas, including ongoing negotiations of Farzad-B gas fields. Sudhir was accompanied by India's ambassador to Tehran Saurabh Kumar and top officials of ONGC Videsh.

Both sides also agreed to explore possibilities for expanding the footprint of Indian companies through their participation in production and development fields. ONGC Videsh as the operator in the Farsi offshore exploration block in the Persian Gulf drilled an exploration well in Farzad-B area to discover gas.