With oil prices plunging to around $46 a barrel on Tuesday, the controversial $8-billion Keystone XL pipeline across the US to be built by North American energy infrastructure major TransCanada Corp could turn into a white elephant, according to some economists. 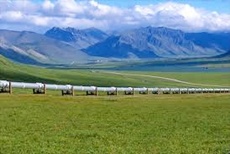 The Keystone XL pipeline is a proposed 1,900-km crude oil pipeline from Hardisty in Alberta extending south to Steele City in Nebraska, which is intended to provide energy security to the US by supplying crude oil from Canadian oil sands to the US refineries in the Gulf coast.

A very low oil price would not sustain the crude oil mining from the Canadian oil sands. Some economists say that most of Canada's oil sands deposits can't start production unless oil prices are at least $60 a barrel,

The benchmark crude prices have fallen almost 60 per cent from their June highs due to glut in global oil supplies including increased shale oil production from the US.

Oil prices fell to their near 6-year lows yesterday with West Texas Intermediate (WTI) crude trading at $45.61 a barrel and Brent crude at $46.22.

The drop followed a comment by the minister of the United Arab Emirates, a prominent member of the OPEC cartel, that the OPEC is unlikely to change the current production levels of 30 million barrels a day and a rebound in prices is not likely to happen soon.

If prices stay in the low $50 range, ''the necessity for Keystone XL may disappear,'' says Pete Howard, the president emeritus of the Canadian Energy Research Institute in Calgary, Alberta.

The US state department's analysis of the project was released a year ago when WTI crude was trading above $90 a barrel.

Looking at a low oil-price scenario, environmental studies conducted by the project's consultants a year ago had stated, ''Oil sands production is expected to be most sensitive to increased transport costs in a range of prices around $65 to $75 per barrel.''

Canada has the world's largest known reserves of tar sand, a source of petroleum. However, the mining process is more costly compared to traditional oil drilling and emits more greenhouse gases.

Currently, there are around 20 oil sands projects in Alberta that are due to commence producing around 1 million barrels per day within the next three years. However, Canada is estimated to have the capacity to produce six times more than that, when fully developed.

According to Howard, ''by this time next year, if the oil price hasn't moved up, the next stream of projects will start to be delayed.''

London-based think tank, Carbon Tracker Initiative projects even more conservative picture, saying that oil prices would need to be at least $95 a barrel for 92 per cent of Canada's tar sands to become economically viable.

However, temporary oil price fluctuations are not significant because investment decisions involve long time horizons. Nevertheless, it is estimated that conventional tar sands mining projects require an average cost of $85 a barrel and steam-assisted extraction $60 a barrel, to make them economically viable.

Nevertheless, TransCanada's chief executive officer Russ Girling said that low-oil prices have not reduced the need for Keystone XL and the company has 100 per cent of its original contracts still in place and producers are keen to reduce their transportation costs in order to increase per-barrel revenue, or netback.

The controversial pipeline project is supported by Republicans in the congress while president Barack Obama has vowed to veto it.

Critiques of Keystone XL pipeline argue the project will pose a greater threat to the environment by unlocking Alberta's high-carbon tar sand. With low oil prices, the cheap transport provided by a pipeline would be just enough to make some new projects profitable enough to develop, and that concerns environmentalists.

Proponents say it will reduce the country's dependence on oil from Venezuela and the Middle East and spur economic growth in the region.

Last Friday, Nebraska's supreme court ruling allowed the pipeline to proceed despite opposition from various quarters. The court has upheld the legality of the state's approval process for the current route, vacating a lower court's decision.

Welcoming the court's decision, TransCanada said that the recent drop in crude oil prices would not affect demand for new pipeline capacity in North America.

Moving a step further, on Monday the senate cleared the 60-vote threshold needed to proceed with legislation to approve the Keystone XL pipeline, setting the stage for a showdown between the congress and president Obama.

The 63-32 win fell short of the crucial 67, the two-thirds majority, needed in the Senate to supersede a presidential veto, but cleared the way for the bill to be put to a final vote on Friday (See: US House of Representatives votes for Keystone XL pipeline construction).

''If this bill passes this congress, the president wouldn't sign it,'' White House spokesman Josh Earnest said. ''There's already a well-established process in place to consider whether infrastructure projects like this are in the best interest of the country.''

Some analysts believe that slumping oil prices could provide President Obama with the excuse to reject the project.

The Canadian government and TransCanada are of the opinion that the pipeline will not increase gas emissions and are hopeful that the project somehow would get its final approval based on its merits.

Meanwhile anti-Keystone pipeline rallies organised by multiple environmental organisations were held in nearly every state across the US yesterday, calling on the president to reject the Keystone XL pipeline.