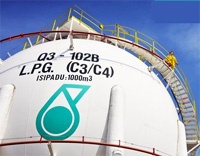 Abbas did not name the Indian company, or at what price the assets are being sold, but said that the deal will be announced next week.

Petronas, one of the world's largest producers and shippers of supercooled LNG fuel, needs money to fund its proposed $20 billion Pacific Northwest LNG project, which will liquefy and export natural gas produced by its gas fields in Montney region and northwest Alberta to energy starving Asian nations.

It is said to have already invested between $9 billion-$11 billion in the LNG project, comprising two plants with an annual capacity of 6 metric tons each and is investing another $5 billion on a 750-km pipeline, which will supply natural gas from the production fields to the two plants.

Petronas has been trying to offload 50 per cent of the company in order to fund this project and the company's vice president global LNG Adnal Zainal Abidin told reporters early 2013, ''We are talking to several possible partners as we want to share our project risk."

Petronas did not disclose the financial terms of both the transactions.

Petronas has also offered IOC a long-term LNG offtake at an attractive price from its LNG project.

It is not known whether Petronas has approached other Indian state-owned energy companies like ONGC, Oil India, BPCL and GAIL.