Moily obliges Rahul: gas quota to be hiked to 12 cylinders 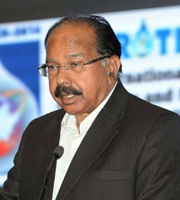 Promptly after Congress vice-president Rahul Gandhi said in a speech on Friday that nine subsidised gas cylinders per household was not enough and the quota should be raised to 12 a year, petroleum minister M Veerappa Moily said this would be done.

''Yes, the cap will be increased to 12,'' Moily said soon after Gandhi made a public demand to Prime Minister Manmohan Singh in his speech at the All India Congress Committee (AICC) session in New Delhi.

Moily, who till last week had maintained that there was no proposal for raising the quota of subsidised LPG cylinders as few households used more than nine a year, said the decision would be announced after approval from the union cabinet.

Increasing the limit to 12 would result in an additional fuel subsidy burden of Rs3,300-5,800 crore for the government, officials said. With a view to cutting its subsidy bill, the government had initially capped the supply of subsidised domestic LPG cylinders to six per household in a year in September 2012, and increased it to nine in January next year under political pressure.