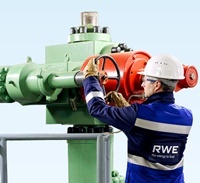 In March Essen-based RWE announced that it would sell its oil and gas exploration and production business Rwe Dea in order to strengthen its bottom line and ease pressure on future capital expenditure. (See: German power producer RWE AG to sell hydrocarbon business)

The decision to sell its subsidiary came after RWE reported a 27.7-per cent decline in net profit to €1.31 billion and earnings per share plunged 36.4 per cent to €2.13.

Citing a banker, The Wall Street Journal had earlier reported that RWE Dea could fetch around €7 billion, while an unnamed industry analyst said that the value of the division could be as high as €8 billion or €9 billion.

US private equity firm KKR & Co has teamed up with the international arm of Kuwait Petroleum Corp to jointly bid for Rwe Dea, while Blackstone Group and Britain's Centrica are seen as potential bidders, the report said.

Flush with funds through the sale of Anglo-Russian oil venture TNK-BP for $55 billion, Fridman has set up a new investment vehicle L1 Energy, which plans to invest around $20 billion into energy assets over the next three to five years, the report added.

RWE Dea currently has stakes in more than 180 licences or concessions in oil and gas blocks in 14 countries and is the operator in almost half of them.