In a dramatic breakthrough, Japanese researchers have extracted gas from methane hydrates from beneath the sea for the first time ever, through a technology that could radically change the world's energy outlook. 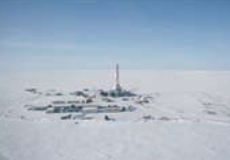 Japanese state-owned enterprise Japan Oil, Gas and Metals National Corp (JOGMEC) said that it has successfully drilled through an ice-like formation of methane hydrate 300 metres below the sea bed, which contain gas molecules.

The first offshore production test has been conducted off the Pacific coast of Atsumi and Shima peninsulas. The flow test applying depressurisation method confirmed production of methane gas from methane hydrate layers, JOGMEC said in a statement.

The extraction of gas from the deposit is highly challenging due to handling of inflammable material and extremely high level of safety requirements for the process, but the gas trapped in the formation can meet the country's requirement for many decades.

"Methane hydrates available within Japan's territorial waters may well be able to supply the nation's natural gas needs for a century," said the company, further stating that the waters under exploration also contain large reserves of rare earth metals.

JOGMEC said that it will analyse the data while continuing with the flow test.