Crude prices fell below the $100 level for the first time in 8 months, hitting $98 per barrel on Friday, amidst weak global economic data and a deepening of the euro zone debt crisis that has compounded an already bleak scenario. 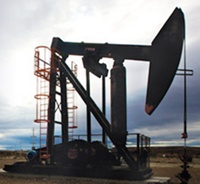 Brent crude prices had surged to $128 a barrel in March 2012, its highest since 2008 amidst concern of supply constraints, following the sanctions imposed on Iran by the US and its European allies.

The euro fell to a 23-month low against the dollar on worries about the Spanish banking sector.

While China reported the year's weakest Purchasing Managers' Index reading of 50.4 in May, Germany's manufacturing output declined at a the fastest pace for almost three years.

The Organisation of Petroleum Exporting Countries  (OPEC), on Friday said the cartel saw no immediate need to cut production despite oil prices dropping below $100 a barrel.

With the dampened global economic outlook, key oil producers that have boosted production in recent months, are unlikely to revert to pushing prices higher without indications of a further fall, say market analysts.

OPEC had increased oil production by 30 million barrels a day in recent months to calm soaring prices following sanctions imposed on Iran by Western powers. That has now been reduced by 170,000 barrels a day since May.