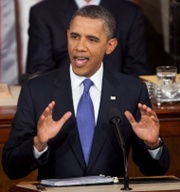 Drilling for shale and cleaner energy sources topped US president Barack Obama's technology priorities for reviving the economy in his final State of the Union address before facing US voters in November.

Hydraulic fracturing, the process involving injection of water, sand and chemicals underground to free gas trapped in rock, could create over 600,000 jobs by the end of the decade, Obama said yesterday. Fracking, as the process, is called is among a list of energy policies which could fuel economic growth he said.

''We have a supply of natural gas that can last America nearly 100 years, and my administration will take every possible action to safely develop this energy,'' Obama said.

Reiterating support for conservation and cleaner sources of power, Obama pledged to support more drilling as part of an  "all-out, all-of-the-above'' policy ''that's cleaner, cheaper, and full of new jobs.'' He added domestic energy production was at an eight-year high and imports of foreign oil were declining, prompting criticism from Republicans.

Representative Darrell Issa, a California Republican and head of the House Oversight and Government Reform Committee, said after the speech that it was just a blind accident, if in fact US was producing more oil or natural gas than in previous years, and it was not because of any of Obama's efforts.

As he came out in support of increased domestic oil and gas production, Obama also pledged support for renewable sources of power, urging Congress to pass clean energy tax credits as also a mandate for more generation of electricity from cleaner sources of power.