The Supreme Court today send notices to Reliance Industries Ltd (RIL) and Reliance Natural Resources Ltd (RNRL) asking them why a gas supply agreement between the two should not be cancelled, thereby making the government a party to the case. 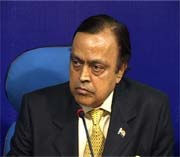 This follows the government's petition on Saturday asking the Supreme Court to annul the family agreement between the Ambani brothers to share the country's gas property between Reliance Industries and Reliance Natural Resources Ltd (See: Government wants SC to `annul' Ambanis' gas pact).

The gas supply agreement between RIL and RNRL is a part of the family agreement on apportioning of property between the two groups led by the Ambani brothers, Mukesh and Anil, respectively.

The details of the family deal, brokered by the Ambanis' mother Kokilaben, have not been made public yet.

The SC posted the case for hearing on 1 September. The SC also said it would club all petitions and applications in the case, and, according RNRL counsel Ram Jethmalani, the court set the 1 September date as it wanted a three-judge bench to hear the case.