Chinese vendors led by Lenovo, Xiaomi, Vivo and Oppo have captured about 40 per cent of the smartphone market in India in the wake of Smsung's market retreat following the recall of is Galaxy 7 Note, according to Chinese media reports. 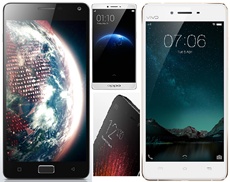 Xiaomi took the third spot with a market share of 10.7 per cent, whereas Chinese vendors collectively took up 40 per cent, according to the survey across 30 major Indian cities.

Chinese smartphone makers cashed in on festive demand in October 2016 and major brands such as Lenovo and Xiaomi pushed sales into Tier 2 and Tier 3 cities.

According to a new IDC report, the period from July to October made up for more than 40 per cent of annual smartphone sales in India. This happened to be before the demonetisation and much of these sales were through online channels from the Tier 2 and 3 cities. Festival offers further helped to push online sales.

''It was almost like a 'Chinese Smartphone Diwali' across all city tiers,'' Upasana Joshi, Senior Market Analyst, IDC India, said. China-based smartphone makers, which drive sales primarily from the online marketplaces, collectively accounted for over 40 per cent market share in the top 30 cities during the month of Diwali festival. Following the rollout of Reliance Jio 4G services, the festive season witnessed surge in sales of 4G handsets.

On the other hand, sale of India's domestic brands saw a decline, with leading brand Micromax reporting a 16.7 per cent month-over-month sales drop in October, according to the IDC.

Despite the vast market that is yet to be exploited in a country with a population of 1.34 billion, that is gaining parity with China, the price war remains fierce in the Indian market where the price of a mobile averages only $100, said the IDC report.

Lenovo has retained its dual-brand strategy in India, Rahul Agarwal, the company's managing director, told Beijing News, adding that Motorola is focused on high-end market, taking up a third of its sales, whereas Lenovo phones targeting lower end account for two thirds.

OPPO is planning to invest 1.5 billion yuan ($215 million) to build an industrial park in India to bring down manufacturing cost, according to media reports earlier last month. The company already has a factory in Greater Noida, says the Beijing News report.