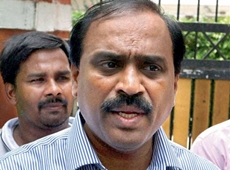 The officials entered Reddy's offices and cordoned off the premises at around 12.30 pm. The raids were still under way till late evening. They also conducted surveys on at least ten locations of high-end event management firms, catering and multimedia service providers who were engaged for the extravagant wedding.

Reddy had rented the Bagalore palace and flown in Brazilian dancers at a reported cost of $75 million to celebrate his daughter's wedding, as the country reels from a cash crisis, AFP reported.

Officials said that taxmen visited seven locations in Bengaluru and three in Hyderabad of those event management companies which were given contracts to give make the wedding of Bramhani in the city last week an opulent affair.

They said the department, after receiving reports of high spending for the event, initiated the action and is checking the account books, payment receipts and contract portfolios of these firms which specialise in creating a special ambience for high-end clientele for events like weddings.

Under survey action, taxmen visit business premises of the trader / operator and make an analysis of the available stock, while under search operations both residential and business premises are visited and cash and incriminating documents, if any, are seized.

Once the scrutiny of accounts and contract books is done, further action of issuing notices to investigate tax evasion by both the contractor and the contractee will be undertaken.

The BJP, prominent ministers from which party were in attendance of the grand affair, has distanced itself from the I-T crackdown. The party said that its leaders' decision to attend the event was personal. However, it added that the opulence was uncalled for and could have been avoided, given the timing of the event.

The opposition also cried foul with Congress MP Anand Sharma lashing out at the BJP in the Rajya Sabha, mocking its state leaders for attending the lavish wedding, allegedly conducted with ill-gotten money. However, interestingly, state Congress President and Karnataka Home Minister G Parameshwara was also seen in attendance at the wedding, along with three of his cabinet colleagues.

Grand opulence
The wedding of the mining baron and former minister's daughter took place at the sprawling Palace Grounds in Bangalore on 16 November. According to the Deccan Chronicle, just a day before the five-day-long event ended, Right to Information activist T Narsimha Murthy had filed a complaint with the Directorate General of Income Tax.

Reddy, a former BJP lawmaker, is under trial and out on bail in a multi-billion coal scam for which he was nabbed in September 2011. He spent over 40 months in jail before the Supreme Court granted him bail in January 2015.

The grandeur of the wedding was such that huge sets replicating Vijaya Vitthala temple of Hampi, the seat of the erstwhile Vijayanagara empire, and Tirumala Tirupati temple were erected at the venue, along with the replicas of the homes of both of bride and groom.

Pre-wedding events were on with equal extravagance at the venue for the five days. The first glimpse of the ostentatious wedding came with the invitation box which had an LCD screen playing a video, where Reddy and the family were seen inviting guests, lip syncing to a song.

It is said that about 50,000 people were invited at the wedding and people were also ferried from Reddy's bastion, Bellary. Reddy and family, dressed up as "royals" in gold and diamond, had left no stone unturned for the wedding. Most utensils for the wedding rituals were either of gold or silver and the entire venue was equipped with air conditioners.