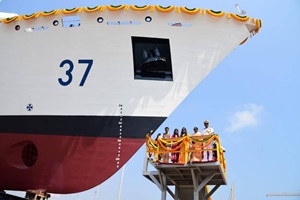 The 2,160-ton vessel, designed and constructed by L&T under a March 2015 ministry of defence contract, wad delivered ahead of schedue, the company stated.
The first vessel of the series ICGS Vikram was handed over as a curtain raiser for DEFEXPO-2018.
The delivery of ICGS Vijaya comes close on the heels of the launch of OPV-3 on 28 August at the L&T Kattupalli shipyard. The work is simultaneously in progress on the OPVs 4, 5 & 6 that are at different stages of completion L&T said.
So far, 40 interceptor boats have been delivered out of the series of 54 boats designed and built for the Coast Guard while the remaining 14 are also ready for delivery, with the programme being about two years ahead of schedule. The Floating Dock FDN-2 for the Navy, designed and built for the first time in India, was delivered in March 2018 and is fully operational at Andaman & Nicobar Islands.
Commenting on the occasion, SN Subrahmanyan, MD & CEO of Larsen & Toubro, said: “Delivery of ICGS Vijaya ahead of contractual schedule reinforces our impeccable record of accomplishments in defence shipbuilding. Going forward, with commitment, huge infrastructure and talent pool in place, L&T aims to contribute significantly towards making Indian Coast Guard and Naval Fleet self-reliant.”
Jayant D Patil, whole-time director (defence) and member of L&T board, said: “Delivery of ships continuously ahead of schedule has won the confidence of our esteemed customers. L&T has pioneered in developing indigenous defence technology for the Indian Armed Forces for the past three decades. With a wide range of defence solutions on offer, L&T is diligently working to realize ‘Make in India’ in defence through a series of success stories across defence domains.”
Vice Admiral B Kannan (Retd.), MD & CEO L&T Shipbuilding, said: “Early delivery of ICGS Vijaya is yet another testimony of L&T’s focused efforts on innovation, quality and speed of execution. Modern shipyard facilities and layout that enhances efficiency, in-house design, modular construction, high level of pre-outfitting, and innovative digital solutions have enabled L&T to achieve this new standard amongst Indian Shipyards. We are proud of attaining yet another benchmark in Indian shipbuilding by accomplishing better than design performance for both ICGS Vikram and ICGS Vijaya established in just two sea sorties.”
MORE REPORTS