Both houses of Parliament were adjourned at noon today as the opposition kept up a relentless ruckus over the government's decision to allow foreign direct investment in multi-brand retail. 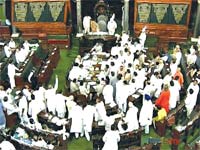 They were abetted by some members of the ruling coalition.

In the morning, soon after speaker Meira Kumar announced the start of 'question hour' in the Lok Sabha, opposition members were on their feet demanding a debate on the FDI issue.

The opposition demanded decision under an adjournment motion moved by BJP member Murli Manohar Joshi, who insisted that the issue be taken up immediately. He was supported by Sharad Yadav (JD-U) and other NDA members.

The Left parties also joined in, and some of their members walked into the well.

Earlier, the speaker led the house in paying respects to those killed in the 26/11 Mumbai terror attacks three years ago.

She also welcomed a Parliamentary delegation from Bulgaria which was seated in the special box, and was treated to a grandstand view of Indian parliamentary proceedings.