Chicago Sun-Times finds new owner – and it's not the Trib

An investment group led by a former Chicago alderman along with a coalition of labour unions has acquired the Chicago Sun-Times - a paper known for its pro-labour stance - it was announced late on Wednesday. A press conference to announce the deal is set for today. 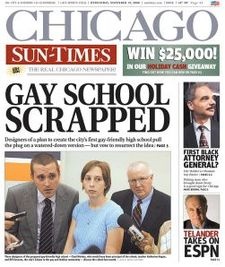 The investment group led by former Chicago Alderman Edwin Eisendrath that includes a coalition of labour unions acquired the Chicago Sun-Times  and Chicago Reader, staving off a competing bid for the papers by the owner of the Chicago Tribune.

Eisendrath came forward with a bid to buy the Sun-Times after owner Wrapports LLC announced earlier this month it would enter into discussions with Tronc Inc - which owns the rival Chicago Tribune, the Los Angeles Times and several other major newspapers - to acquire the paper.

Earlier, Chicago-based Tronc's announcement it intended to acquire Wrapports aroused the concern of the US Justice Department's Antitrust Division, which asked Wrapports to extend the deadline to allow bids from other potential buyers.

''Tronc has always been committed to keeping the Sun-Times an independent media voice within the city of Chicago,'' Tronc President Tim Knight said in a statement.

Knight said the expectation is that the new owners will honor the Chicago Tribune's contractual agreement for printing and distribution services under the terms of a multiyear agreement.

Wrapports' $25 million-a-year contract with Tronc to print and distribute the Sun-Times is a major source of revenue for the Tribune owner. Controlling that revenue stream going forward was a major incentive for Tronc to purchase Wrapports.

Terms of the sale weren't disclosed. But a source involved in the transaction said the purchase price of Sun-Times parent Wrapports LLC totalled only $1.

Eisendrath has said his bid was an effort to make sure that the city has a newspaper that represents working people.

''A great group has come together and made sure that a genuine voice with honest and good reporting that connects with working men and women thrives,'' Eisendrath said shortly before the deal closed.

''The Sun-Times has been an important part of Chicago for our whole lives,'' Eisendrath added. ''We are inspired by the writing and reporting, and a group of civic-minded leaders wanted to save that.''

Eisendrath said he didn't yet have permission to identify all the members of his investment group. Besides Eisendrath and the Chicago Federation of Labor, it includes other local labour unions and about a half-dozen other individuals.

''Our investors include more than half a million hardworking people around Chicago, and you can bet we'll be talking with a voice that resonates with the working class,'' Eisendrath said. ''We're going to organize around that to raise circulation.''

The Eisendrath group, called ST Acquisition Holdings LLC, won over the US Department of Justice's Antitrust Division - which is responsible for investigating newspaper mergers and oversaw the sale - by securing more than $11.2 million in operating funds to bankroll the company for an undisclosed period.

Tronc chairman Michael Ferro - the principal owner in Wrapports before he assumed a controlling interest in Tronc and donated his Wrapports shares to a charitable trust - had long expressed an interest in single ownership of both the Tribune and Sun-Times. Tronc, short for Tribune online content, had announced its intent to buy the Sun-Times in May, setting forward the process overseen by the Justice Department by which others could bid.

Traditionally, the federal government has frowned on a single entity controlling multiple media operations in the same market. So the sale process required Wrapports to sell to a bidder other than Tronc if that bidder could prove it had the money to operate the Sun-Times, hence the $1 purchase price.

Two-paper city
The Eisendrath group's deal preserves two independent newspaper voices in Chicago, one of the last two-newspaper towns in America. Tronc had vowed to operate the Tribune and Sun-Times as independent titles, though media observers had expressed skepticism over how long that might last.

''We're thrilled with this development,'' News Guild consultant David Roeder said. ''We look forward to working with Edwin Eisendrath and his backers in charting a new course forward for the Sun-Times and Reader.''

Representatives from the Chicago Federation of Labor said the paper will retain its independence in reporting on labour unions.

''We didn't get involved in order to get a pass from reporters,'' CFL secretary-treasurer Bob Reiter said. ''Our reporters will look at what is happening and report the story. If that means someone in the labour movement has an issue, then that's the story.

''We got involved to protect the institution of journalism, but it's not just about keeping the paper's doors open. The Sun-Times is a historic paper and we've been given the opportunity to transform it. We've got a lot of exciting ideas,'' Reiter said.

''The little guy won here,'' said CFL President Jorge Ramirez. ''This is about fair, honest and balanced reporting. The Sun-Times has a rich history of that.''

Old but struggling
The Sun-Times has long been struggling financially. One past owner, British-Canadian media baron Conrad Black, was convicted of fraud in 2007 for allegedly siphoning millions of dollars from the company (See: US Supreme Court to hear appeal of jailed media mogul Conrad Black).

In 2009, Sun-Times Media Group declared bankruptcy, and a group of investors headed by James Tyree, chairman of Mesirow Financial Holdings, bought the company out of bankruptcy for about $26 million later that year. Then in 2011, Wrapports, which also owns The Reader, an alternative weekly newspaper, bought Sun-Times Media.

The Sun-Times was home to famed movie critic Roger Ebert, and columnist Mike Royko before he left for the Tribune.