InterContinental Hotels Group (IHG) has rejected a £6-billion takeover approach from a mystery US suitor, according Sky News. 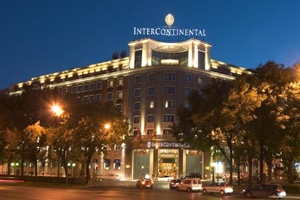 The report of a possible acquisition had led to fears that the UK's biggest hotel company could be next on the list of targets of US firms seeking a tax inversion deal.

Through tax inversion deals companies seek to re-incorporate themselves in locations with more advantageous tax policies.

The company's share price, which was up around 20 per cent over the past year, closed 0.32 per cent higher at 2,226p in London on Friday, giving the group a market value of £5.7 billion.

Sky News on Saturday quoted unidentified sources as reporting that InterContinental Hotels Group, owner of the Crown Plaza and Holiday Inn brands, had rejected a bid approach from a mystery US suitor in recent weeks as the board considered the offer too low.

Although the bidder had not been identified Sheraton and Westin owner Starwood Hotels was said to be a possible suitor. Sky News, quoted sources as saying that the FTSE 100 company was braced for another approach, with US hotel operators said to be seeking to move their tax domicile.

The same consideration had been cited to be among one of the reasons behind Pfizer Inc's takeover interest in AstraZeneca Plc.

Meanwhile, International Business Times reports that earlier this month, IHG said it would use the sale of two major US hotels to return $750 million to its shareholders.

The group would consider disposing of more hotels due to the strong demand for prime hotels globally, IHG said in a statement.

The latest dividend payout took the total funds returned to shareholders to £10.3 billion since 2003, which included £1.6 billion in ordinary dividends, the company said as it reported its strongest room revenue performance in seven quarters.

The January-March first quarter saw IHG sell its InterContinental Mark Hopkins San Francisco hotel and an 80 per cent stake in the InterContinental New York Barclay for $394 million and bag long-term management contracts at the hotels in return.