Prime Minister Narendra Modi on Wednesday inaugurated a three-day Global Ayush Investment and Innovation Summit 2022 at Gandhinagar, Gujarat. The Ayush sector is growing significantly – by 17 per cent per year since 2014 – and is projected to reach $23 billion by the end of this year. 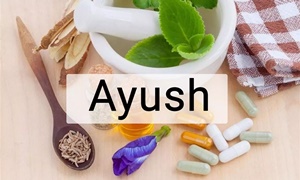 The summit will set in motion a dialogue among entrepreneurs, industry, startups and other stakeholders that would encourage them to increase investment for innovation in Ayush as the sector continues to showcase colossal room for growth.
WHO Director General Dr Tedros Adhanom Ghebreyesus, Prime Minister of Mauritius Pravind Kumar Jugnauth, union minister of health and family welfare Dr Mansukh Mandaviya, union minister for Ayush Sarbananda Sonowal, Chief Minister of Gujarat Bhupendra Patel, minister of state Dr Munjpara Mahendra Kalubhai, ambassadors, foreign dignitaries, investors, industry experts and other important stakeholders were present during the inaugural session of the Global Ayush Investment and Innovation Summit 2022.
“We are already witnessing unprecedented growth in the production of Ayush medicines, supplements and cosmetics. In 2014, where the Ayush sector was less than $3 billion, today it has increased to more than $18 billion. Unprecedented efforts have been made in the past few years to promote the export of Ayush products,” Prime Minister Narendra Modi said in his inaugural speech.
The prime minister also announced several new initiatives in Ayush sector, the first being a special Ayush mark for Ayush products. This will give people all over the world the confidence of quality Ayush products. Government will develop a network of Ayush parks to encourage the promotion, research and manufacturing of Ayush products across the country.
A new category named 'Ayush Aahar' was announced which will greatly facilitate the producers of herbal nutritional supplements.
Further, the prime minister announced a major initiative for foreign nationals who want to come to India to take advantage of Ayush therapy. India will soon introduce a special Ayush visa category. Describing the current age, the era of unicorns, the prime minister informed that in the year 2022 itself, 14 start-ups from India have joined the Unicorn Club. “I am sure unicorns will emerge from our Ayush start-ups very soon”, he stated.
Prime Minister Modi announced launch of Ayush Export Promotion Council and four Ayush ICT initiatives, which include Ayush Information Hub, AyuSoft, Ayush Next and Ayush GIS. Modi also released a comic book named ‘Professor Ayushman’, which describes how Ayush systems and products helped in fighting not only Covid-19 but other diseases also.
On this occasion, the prime minister distributed awards to the winners of 'Ayush Start-up Challenge’, organised by All India Institute of Ayurveda (AIIA) in association with Start-up India. The inaugural session also included signing of 5 memoranda of understanding among global institutions and governments.
Addressing the session, Dr Tedros said the Ayush sector is growing significantly – by 17 per cent per year since 2014. He said that the Ayush industry is projected to reach $23 billion by the end of this year. “We are exploring innovative study designs and the use of artificial intelligence to document the impact of traditional medicine practices, in cases when standard randomised trials are not possible or are difficult to undertake. Strengthening the evidence base of traditional medicine should facilitate its use by communities, to promote better health outcomes, economic benefits and overall impact” he added.
Mauritius PM Pravind Kumar Jugnauth congratulated the government of Gujarat on the launch of the WHO Global Center of Traditional Medicine and said that Mauritius has recognised that traditional medicine complements modern medicine.
In his address, union minister of Ayush Sarbananda Sonowal, said, “Global Ayush Investment and Innovation Summit is expected to develop awareness among stakeholders about the business opportunities, encouraging young entrepreneurs to use of modern technologies and modern innovations to highlight opportunities at global level. The deliberations in the Summit are expected to educate young entrepreneurs about the various possibilities of business development in Ayurveda sector.”
He said the Ayush ministry and the ministry of micro, small and medium enterprises (MSME) are developing entrepreneurship among practioners of Ayurveda and other traditional medicines. The ministry of Ayush has also developed an Entrepreneurship Development Programme (EDP) to encourage young entrepreneurs to establish startups in Ayush in line with the Startup India Initiative.
The three-day summit will witness 5 plenary sessions, 8 roundtables, 6 workshops, and 2 symposiums, with the presence of around 90 eminent speakers and 100 exhibitors. The Summit will help uncover investment potential, and give a fillip to innovation, research and development, start-up ecosystem, and the wellness industry. It will help bring together industry leaders, academicians and scholars together and act as a platform for future collaborations.
The Global Ayush Investment and Innovation Summit, which commenced a day after the prime minister inaugurated the WHO-Global Centre for Traditional Medicine in Jamnagar, Gujarat, will be in progress till 22 April 2022.
MORE REPORTS