James Allison of the United States, Tasuku Honjo of Japan won the 2018 Nobel Prize for Physiology or Medicine on Monday for game-changing discoveries about how to harness and manipulate the immune system to fight cancer. 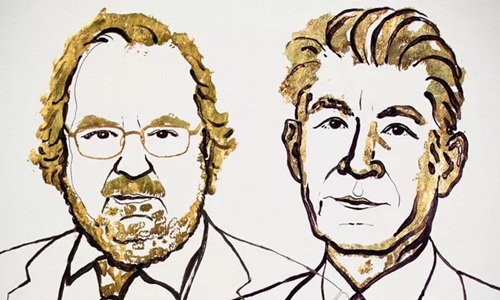 Cancer kills millions of people every year and is one of humanity’s greatest health challenges.
By stimulating the inherent ability of our immune system to attack tumor cells this year’s Nobel Laureates have established an entirely new principle for cancer therapy.
James P Allison studied a known protein that functions as a brake on the immune system. He realised the potential of releasing the brake and thereby unleashing immune cells to attack tumors. He then developed this concept into a brand new approach for treating patients.
In parallel, Tasuku Honjo discovered a protein on immune cells and, after careful exploration of its function, eventually revealed that it also operates as a brake, but with a different mechanism of action. Therapies based on his discovery proved to be strikingly effective in the fight against cancer.
Allison and Honjo showed how different strategies for inhibiting the brakes on the immune system can be used in the treatment of cancer. The seminal discoveries by the two Laureates constitute a landmark in our fight against cancer, the Nobel Assembly at Sweden’s Karolinska Institute said as it awarded the prize of nine million Swedish crowns ($1 million).
The scientists’ work in the 1990s has led to new and dramatically improved therapies for cancers such as melanoma and lung cancer, which had previously been extremely difficult to treat.
“The seminal discoveries by the two Laureates constitute a landmark in our fight against cancer,” the release stated.
Medicine is the first of the Nobel Prizes awarded each year. The prizes for achievements in science, literature and peace were created in accordance with the will of dynamite inventor and businessman Alfred Nobel and have been awarded since 1901.
The literature prize will not be handed out this year after the awarding body was hit by a sexual misconduct scandal. A Swedish court on Monday found a man at the centre of the scandal guilty of rape and sentenced him to two years in jail.
Allison’s and Honjo’s work focused on proteins that act as brakes on the immune system - preventing the body’s main immune cells, known as T-cells, from attacking tumours effectively.
Allison, professor at the University of Texas MD Anderson Cancer Center, worked on a protein known as CTLA-4 and realised that if this could be blocked, a brake would be released, unleashing immune cells to attack tumours.
Honjo, professor at Kyoto University since 1984, separately discovered a second protein called PD-1 and found that it too acted as an immune system brake, but with a different mechanism.
The discoveries led to the creation of a multibillion-dollar market for new cancer medicines. In particular, drugs targeting PD-1 blockade have proved a big commercial hit, offering new options for patients with melanoma, lung and bladder cancers.
US drugmakers Merck & Co and Bristol-Myers Squibb currently lead the field after winning drug approvals in 2014, but Roche, AstraZeneca, Pfizer and Sanofi are also fielding rivals.
Sales of such medicines, which are given as infusions, are expected to reach some $15 billion this year, according to Thomson Reuters’ consensus forecasts. Some analysts see eventual revenues of $50 billion.
Honjo, who is now 76, told a news conference in Tokyo he was honoured to get the Nobel, but that his work was not yet done.
“I would like to keep on doing my research ...so that this immune treatment could save more cancer patients,” he said.
Allison also said he was “honored and humbled” by the award.
“I never dreamed my research would take the direction it has,” he said in a statement on his university’s website.
“It’s a great, emotional privilege to meet cancer patients who’ve been successfully treated with immune checkpoint blockade. They are living proof of the power of basic science.”
MORE REPORTS