US health insurer Cigna today announced a $67-billion deal to acquire pharmacy benefits manager Express Scripts, adding to the list of mergers and acquisitions in the sector, as insurers try to tackle soaring healthcare costs. 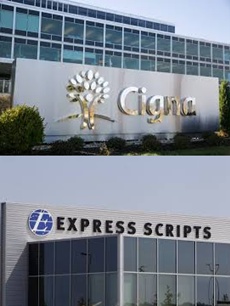 The deal, which follows the $69-billion merger of insurer Aetna and drugstore chain CVS Health, announced last December, highlights a trend toward cost-control through merger of insurers with medical suppliers and healthcare providers.

Cigna said it would pay $54 billion for Express Scripts and assume its debt of approximately $15 billion, which would take the cash-and-stock deal to $67 billion.

Cigna said its offer represented a premium of nearly 31 per cent to Express Scripts' Wednesday closing price of $73.42.

The merger consideration will consist of $48.75 in cash and 0.2434 shares of stock of the combined company per Express Scripts share. The transaction was approved by the boards of directors of both companies.

''Together, we will create an expanded portfolio of health services, delivering greater consumer choice, closer alignment between the customer and health care provider, and more personalised value. This combination will create significant benefits to society and differentiated shareholder value,'' he added

With a full portfolio of medical, behavioural, specialty pharmacy and other health engagement services across a wide array of retail and online distribution channels, the combined company will be able to deliver superior services while also driving long-term value creation for shareholders, Cigna said.

Cigna said the combined company will use its broad and proven network of delivery system partnerships and act as the connective tissue between individuals and their healthcare providers, providing a more coordinated approach to an individual's health care journey, reducing complexity and creating better outcomes.

The combined company's board will be expanded to 13 directors, including four independent members of the Express Scripts board.

At closing, the combined company will make an incremental investment of $200 million in its charitable foundation, to support the communities in which it operates, and with the continued focus on improving societal health.

Cigna intends to fund the cash portion of the transaction through a combination of cash on hand, assumed Express Scripts debt and new debt issuance and Cigna has obtained fully committed debt financing from Morgan Stanley Senior Funding, Inc and The Bank of Tokyo-Mitsubishi UFJ Ltd.