The National Pharmaceutical Pricing Authority (NPPA) on Monday further lowered the maximum prices of bare metal and drug-eluting stents (DES) to Rs7,660 and Rs27,890 from Rs8,000 and Rs31,000, respectively. 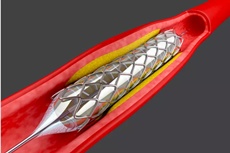 The price of bare metal stent has been fixed at Rs7,660 while that of drug eluding stent (DES) and bioresorbable vascular scaffold / biodegradable stents have been fixed at Rs27,890 per unit.

The new sealing prices are applicable from today 13 February, 2018, and are applicable to all such stents available in the market, NPPA stated on its website.

The new prices are also applicable to 'covered coronary stents', it said.

NPPA has directed all manufacturers of coronary stents - both BMS and DES versions - to revise prices downward not exceeding the prescribed ceiling price plus goods and services tax applicable and paid, if any.

Stent manufacturers have been asked to add only applicable goods and services tax and no other chares to the MRP.

The drug price regulator also decided not to allow sub-categorisation of DESs as demanded by a section of the industry. ''There is no case for sub classification of DES in the light of lack of enough clinical evidence to support superiority of one DES or the other,'' the NPPA said in a statement.

The authority noted that Indian and foreign manufacturers of devices such as cardiac guidewires and balloon catheters have been getting margins ranging from 62 per cent to 405 per cent. While an imported cardiac balloon catheter had an average trade margin of 405 per cent, a locally manufactured cardiac guiding catheter had an average margin of 62 per cent, it said.

The ceiling prices are inclusive of 8 per cent maximum permissible trade margin. Trade margin in excess of the specified 8 per cent will be construed as violation of rules and appropriate action taken against those involved in such transactions.

The authority has given stakeholders time till March 15 to respond.