US pharmacy operator CVS Health Corp (CVS) is nearing a deal to buy the third-largest health insurer in the US, Aetna Inc, for over $66 billion, and an agreement could be announced as early as Sunday or Monday, Reuters reported, citing sources familiar with the matter. 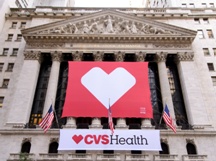 The deal would help the drugstore giant fortify itself against looming competition from Amazon.com Inc, and also save over $1 billion annually, the report said.

The deal would merge one of the nation's largest pharmacy benefits managers and pharmacy operators with one of its oldest health insurers, whose far-reaching business ranges from employer healthcare to government plans nationwide.

Healthcare consolidation has been a popular route for insurers and pharmacies, under pressure from the government and large corporations to lower soaring medical costs.

Pharmacy benefit managers (PBMs) such as CVS negotiate drug benefits for health insurance plans and employers, and have in recent years taken an increasingly aggressive stance in price negotiations with drugmakers, according to Reuters.

They often extract discounts and after-market rebates from drugmakers in exchange for including their medicines in PBM formularies with low co-payments.

A tie-up with Aetna could give CVS, which has 9,000 pharmacies, more leverage in its price negotiations with drug makers, but also subject it to more antitrust scrutiny.

CVS and Aetna started discussing terms only recently, and a deal is not expected for a few weeks, though the pace of the talks could accelerate given the publication of the negotiations.

The reports did not specify how much of CVS' bid is cash versus stock, but given CVS's and Aetna's market capitalizations of $77 billion and $54 billion respectively, a substantial stock component is likely in the deal.

Aetna earlier this year closed the door on a deal with rival insurer Humana Inc after antitrust regulators said that combination and a rival deal between Anthem Inc and Cigna Corp were anti-competitive.

A potential deal would come after years of major changes to the US health insurance industry under former President Barack Obama, whose 2010 Affordable Care Act created new rules for how insurers operate and expanded insurance to 20 million more Americans.

Republican President Donald Trump has promised to turn back many of Obamacare's Affordable Care Act's aspects, but Congress has not been able to agree on a repeal or a replacement. The lack of progress - as well as Trump's executive order to bring down healthcare costs - has created uncertainty for insurers as they head into 2018.

Rhode Island-based CVS Health is the largest retail pharmacy and health care company in the US.

Anthem, based in Connecticut, is the nation's third-largest health insurer and the largest member of the Blue Cross and Blue Shield Association.

It holds the Blue Cross license in 14 states and provides health insurance to 39 million people.  In 2015, Anthem reported over $63 billion in revenues.