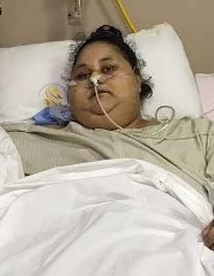 ''Eman successfully underwent a Laparoscopic Sleeve Gastrectomy on March 7 at Saifee Hospital. She had an uneventful surgery and anaesthesia course,'' the statement issued by the hospital here said.

Eman has been put on oral fluids which she has been accepting well, the hospital stated.

The Egyptian national, weighing over 500 kg, was brought to Mumbai a month ago and has since been undergoing pre-operative care at the hospital. According to doctors here, the woman had not moved out of her house for the last 25 years.

In the past month doctors had put her on a diet and medicines as a result of which she lost 100 kg, according to the hospital.

Bariatric surgery is a stomach-shrinking bypass procedure carried out on those wanting to lose excessive weight. It is increasingly common in India, which has a growing problem with obesity, particularly in urban areas.

The specialist weight-loss surgeon said he and his team at Mumbai's Saifee hospital hoped the surgery would help Abd El Aty shed another 150kg.

''The future course of action for the medical team working on her will be to correct all her associated medical problems to get her fit enough to fly back to Egypt as soon as possible,'' the statement added.

Eman is under the care of a team of doctors led by Dr Muffazal Lakdawala. She needs continuous care as she suffers from other ailments due to her obesity, the doctors said.

Eman suffers from a number of health problems, including diabetes, high blood pressure, hypertension and sleep deprivation. She has also suffered a stroke, according to information released on her health condition.

Over the next few years, Eman will undergo a series of procedures to help her bring down her weight to normal levels, according to the hospital. While the hospital has waived charges for Eman's treatment, her travel costs are borne by an online crowd-funding initiative called 'Help Save Eman--The Heaviest Woman in the World'.

So far Rs21 lakh of the Rs50 lakh required for her regular travel to India has been collected from sponsors.