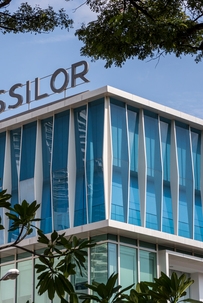 Under the terms of the transaction, Leonardo Del Vecchio, Luxottica's 81-year-old billionaire founder and Italy's richest man, who holds around 62 per cent of the company through his family holding company Delfin, will give his entire stake in return for newly-issued Essilor shares at an exchange ratio of 0.461 Essilor shares for 1 Luxottica share.

Post closing, Del Vecchio will be the biggest shareholder of the combined group with between 31 per cent and 38 per cent stake, but voting rights will be capped at 31 per cent.

The merged company will be named EssilorLuxottica and Del Vecchio and Essilor chairman and CEO Hubert Sagnieres will run the company, while the 16-strong board will have an even split of Essilor and Luxottica executives.

EssilorLuxottica will be based and listed in Paris.it will have 140,000 employees, have a combined market value of about €46 billion, sales in more than 150 countries, and annual revenue of about €15 billion.

Both companies expect to progressively generate revenue and cost synergies ranging from €400 million to €600 million in the medium term and accelerating over the long term.

The merged company would become a key player, operating across all segments of the eyewear industry and be in a stronger position to address the vision needs of the 7.2 billion people in the world out of which 2.5 billion people still suffer from uncorrected vision problems, the companies said in a statement.

Commenting on the transaction, Leonardo Del Vecchio, said, ''With this agreement my dream to create a major global player in the eyewear industry, fully integrated and excellent in all its parts, comes finally true .......... Finally, after fifty years, two products which are naturally complementary, namely frames and lenses, will be designed, manufactured and distributed under the same roof".

''Our project has one simple motivation: to better respond to the needs of an immense global population in vision correction and vision protection by bringing together two great companies, one dedicated to lenses and the other to frames. With extraordinary success, Luxottica has built prestigious brands, backed by an industry state-of-the-art supply chain and distribution network. Essilor brings 168 years of innovation and industrial excellence in the design, manufacturing and distribution of ophthalmic and sun lenses,'' said Hubert Sagnières.

A low-key company, Luxottica dominates the global eyewear market by buying out its rivals.

Started in small tool shop by Leonardo Del Vecchio in Agordo, Italy in 1961, Luxottica now has an annual turnover of €9 billion. It sold 65 million pairs of frames last year.

With over 65,000 employees, Luxottica operates in over 150 countries, has 7,400 stores, and six production facilities in Italy, three in China, one in Brazil, one in the US and a small plant in India.

The company's products are designed and manufactured at its six plants in Italy, two wholly-owned plants in the China, one each in Brazil and the US.

It acquired Ray-Ban in 1999 and managed to turn the $29-a-pair gas station brand into the world's top-selling sunglasses.

Due to lack of competition, Luxottica routinely sells eyecare glasses at over $200 although it cost less than $30 to make.

It operates in more than 100 countries with 32 plants, more than 490 prescription laboratories and edging facilities, 5 research and development centres around the world.

Essilor has annual revenue of nearly €7 billion and employs around 61,000 people.