In a first, Delhi docs use robots to fix serious spinal disease

Looking for precision, less pain and faster recovery, doctors at Indraprastha Apollo Hospital in New Delhi used robotic surgery to help a 10-year-old boy from Bihar who was diagnosed with tuberculosis of the spine and brought to Delhi in a serious condition. 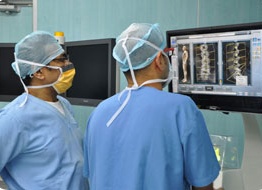 The boy, Shivam, successfully underwent a two-hour surgery at the hospital on 15 July. The doctors say this is the first time a complex spinal deformity has been corrected using robotic arms.

''He is comfortable, walking and will return to school in two weeks,'' said spine surgeon Rajendra Prasad.

The boy suffered from a collapsed vertebra at the mid-chest level leading to compression of the spinal cord with a large collection of pus in the area.

''Shivam got fever about five months ago, after which he developed back pain and bending of the spine. This made it difficult for him to walk. He developed weakness in the legs and was unable to go to school or play with friends.''

The robot not only fixed screws to straighten the vertebrae that had turned into a hunchback but it also helped surgeons remove the pus collected inside without cutting open the chest. It is suspected that the pus formation was caused due to tuberculosis infection.

The boy was brought to Delhi by his parents after initial treatment in his home town failed  to provide much relief.

An MRI revealed the collapse of the thoracic ninth and tenth vertebrae, leading to compression of the spinal cord along with a large collection of pus in and around the spine in that area and the chest cavity.

''Standard surgery in such cases involves a large cut in the chest with prolonged hospital stay. Pain after the procedure can make recovery and return to normal activities slow,'' added the Dr Prasad, senior consultant in the neurosurgery department at Apollo Hospital.

The doctors then looked at the possibility of conducting a robotic surgery.

Robotic surgery has been attempted for the chest cavity but not in a case like Shivam's, Dr Prasad said.

''After reviewing the scans, robotic instrumentation and discussion it was felt that the procedure could be attempted. And if successful, it would give the child the benefit of this latest technology.

''Robotic surgery has been conducted in the case of lumbar spine disc disease in the United States. This is the first case outside of the United States where pus and infected tissue was removed from the thoracic spine, allowing relief of pressure from the spinal cord, thereby relieving pain and improving power in the legs so Shivam can walk freely,'' he added.