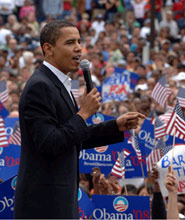 US president Barack Obama's state machinery mounted a campaign using techniques including web videos, fact-checks and rapid response efforts to counter the Republican opposition to his efforts to overhaul the US healthcare system.

The president insists that the package is vital to a recovery in the US economy.

He focused his points to the middle-class Americans, seeking to convince them of the benefits from proposed consumer protections on healthcare.

"The way politics works sometimes is that people who want to keep things the way they are will try to scare the heck out of folks, and they'll create boogeymen out there that just aren't real," the president said at a town hall meeting at Portsmouth high school, Hampshire.

"We can't let them do it again," he asserted.

Obama's appearance in Portsmouth was his first big public healthcare event since the protests at healthcare reform events began hitting the headlines.