Campbell Soup to buy snacks maker Snyder's-Lance for $4.87 b 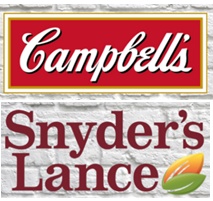 The acquisition, which has been approved by the boards of both companies, is expected to close early second quarter of calendar 2018.

Certain members of the Warehime family, who collectively own 13.2 per cent of Snyder's-Lance's stock, have agreed to vote their shares in support of the transaction.

Campbell Soup expects around $170 million in cost synergies by end of fiscal 2022.

Campbell plans to finance the acquisition through $6.2-billion of debt comprising a combination of long-term and short-term debt and said that it will suspend its earlier announced share repurchase program to maximise free cash flow for the purposes of paying down debt.

A successful deal would be the biggest acquisition in Campbell Soup's 148-year history.

Snyder's-Lance was formed through the 2010 merger of Lance and Snyder's of Hanover.

With the addition of Snyder's-Lance's portfolio, Campbell's snacking business would increase from 31 per cent to 46 per cent of its annual $2.5 billion sales.

Campbell said that the transaction will expand its footprint in the $89 billion US snacking market to more than $10 billion.

Snyder's-Lance will become part of Campbell's Global Biscuits and Snacks division, which includes the company's Pepperidge Farm, Arnott's and Kelsen businesses, and the simple meals and shelf-stable beverages business in Australia, Asia Pacific and Latin America.

''The combination of Snyder's-Lance brands with Pepperidge Farm, Arnott's and Kelsen will create a diversified snacking leader, drive sales growth and create value for shareholders. This acquisition will dramatically transform Campbell, shifting our center of gravity and further diversifying our portfolio into the faster-growing snacking category,'' said Denise Morrison, Campbell's president and CEO.

This is Campbell's sixth acquisition in five years as the company strives to reshape and diversify its portfolio.