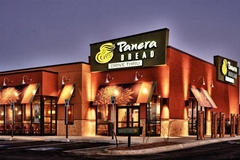 3G Capital, owner of Burger King, Kraft Foods and Tim Hortons, has hired investment bank Lazard to study the possibility of a bid, the report said.

Panera has agreed to pay JAB a termination fee of $215 million if it accepts a better offer.

Panera Bread is a bakery-café fast casual restaurant chain operating in the US and Canada employing more than 100,000 people and generates annual revenues of $5 billion.

JAB Holding focuses on investments in companies with premium brands in the consumer goods sector.

A successful deal would see JAB selling Caribou and Pete's coffee at Panera.

3G Capital, co-founded by Brazilian billionaire Jorge Paulo Lemann, is also well known for two reasons – for buying well known brands in the US food industry, and for maximising profit through a process called ''zero-cost budgeting,'' where every division of a company must justify its costs every financial year.