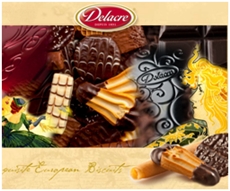 "This is an opportunity to establish ourselves in a market in which we are not yet present and has a significant growth potential," Ferrero said in an internal communiqué, which Stampa was able to obtain, but, the communiqué did not give any financial details of the transaction.

Yildiz, which also owns brands McVitie and Nutella, said last month that it plans to list Pladis in London by 2020, but retain a majority stake.

Delacre, which was founded in 1891 by Brussels pharmacist Charles Delacre, makes high quality pastry biscuits like "Marquisette", "Biarritz", "Délichoc, and others.

It has two production sites located at Lambermont in Belgium and Nieppe in France, employs around 300 people, and posted a turnover of €120 million last year.

Founded in 1944 and based in Istanbul, Yildiz exports 160 brands and 2,700 products to 110 countries. The Istanbul-based company has 53 plants around the world, including 44 in Turkey and 9 abroad.

The group employs more than 33,000 people and has annual turnover of around 13 billion Tukish Lira.