GS Capital in talks to sell Michael Foods for around $2.5 bn

GS Capital Partners, an affiliate of Goldman Sachs is in advanced talks to sell US food processor and distributor Michael Foods Group Inc, in a sale that has seen Tyson Foods Inc and Post Holdings Inc emerge as final contenders for a deal worth around $2.5 billion, Reuters reported yesterday, citing people familiar with the matter. 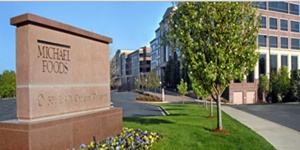 Michael Foods is evaluating binding bids from Tyson and Post that were submitted earlier this week and is expected to announce a deal in the next two weeks, the report said.

For both Tyson and Post, a takeover of Michael Foods would be their largest deal they would have sealed in recent years.

The company was founded in 1895 and is based in St. Louis, Missouri.

Tyson Foods is the second-largest food production company in the Fortune 500, one of the world's largest meat and poultry producer, and according to Forbes one of the 100 largest companies in the US.

The Arkansas-based company makes a wide variety of protein-based and prepared food products at its 123 food processing plants. Tyson Foods has approximately 107,000 employees, who work at more than 300 facilities in the US and throughout the world.