Patanjali Ayurved, the consumer, healthcare and personal goods company co-founded by yoga guru Ramdev, is hoping to double its sales revenues to Rs10,000 crore in 2016-17, after sales grew 150 per cent in the previous financial year to Rs5,000 crore. 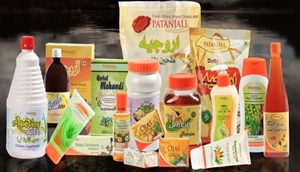 Annual sales of Rs10,000 crore will put Patanjali Ayurved ahead of multinationals like Nestle, Colgate-Palmolive and Procter & Gamble in India.

With its headquarters in Delhi and production units in Haridwar, Uttarakhand, Patanjali Ayurved has four business divisions - home care, cosmetics and health, food and beverages, and health drinks. The company will soon be venturing into khadi products and animal feed this year, Ramdev said.

Patanjali Ayurved, founded in 2007, has grown more than 10 times in revenue in five years, an unprecedented feat in India's fast-moving consumer goods industry.

"This is just the beginning. Nestle, Hindustan Unilever and Colgate- Palmolive will be left clueless eventually," Ramdev said.

The company's `Dant Kanti' toothpaste posted sales of Rs450 crore in 2015-16 and `Kesh Kanti' shampoo and hair oil posted Rs350 crore sales in less than a year, he pointed out.

Patanjali Ayurved plans to increase its distribution network in 2016-17.

The company has 4,000 distributors, 10,000 stores and 100 mega-marts. It has also tied up with retail chains like the Future Group and Reliance Retail to expand sales.

To meet the increasing demand, the FMCG firm will set up at least four new manufacturing units in the current year at an investment of Rs1,000 crore.

"We will set up six processing units in various parts of the country. Apart from this, we will invest Rs 150 crore in research and development," Ramdev said.

The units will come in Vidarbha in Maharashtra, Bundelkhand in Uttar Pradesh and in Madhya Pradesh. "Banks are more than willing to lend to us. We have no shortage of funds to expand," Ramdev said.

"We are going to look at an e-commerce strategy and focus on strengthening our exports to at least 10-12 countries," said Balkrishna, Ramdev's disciple and co-founder of Patanjali Ayurved.