Praxair Inc of the US and Linde AG of Germany, yesterday announced that they intend to combine in an over $65-billion all-stock merger in order to create the world's biggest industrial-gas company. 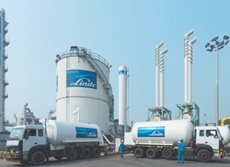 ''We consider this to be a true strategic merger, as it brings together the capabilities, talented people and best-in-class processes of both companies, creating a unique and compelling opportunity for all of our stakeholders,'' said Steve Angel, Praxair's chairman and CEO.

''Under the Linde brand, we want to combine our companies' business and technology capabilities and form a global industrial gas leader. Beyond the strategic fit, the compelling, value-creating combination would achieve a robust balance sheet and cash flow and generate financial flexibility to invest in our future,'' said professor Dr. Aldo Belloni, CEO of Linde.

Post closing, Linde and Praxair shareholders would each own approximately 50 per cent of the combined company assuming all the shares are tendered to the offer.

The merged company would create around $1 billion (€0.9 billion) in annual synergies, driven by scale benefits, cost savings and efficiency improvements.

Based on 2015 annual results, the merger would create a company with pro forma revenues of approximately $30 billion (€28 billion), and a current market cap of over $65 billion (€61 billion).

The merged company's board would be governed with equal representation from Linde and Praxair. Linde's supervisory board chairman, Professor Dr. Wolfgang Reitzle, would become chairman of the new company and Praxair's chairman and CEO, Steve Angel, would become CEO and a member of the board.

The combined company would trade under the Linde name and be listed on both the New York and the Frankfurt Stock Exchanges, and be headquartered in a neutral member state of the European Economic Area with the CEO based in Connecticut and corporate functions would be split between Connecticut and Munich.

The new holding company would be formed and domiciled in a neutral member state of the European Economic Area (EEA), with the CEO

The deal was finalised after Praxair agreed to keep operations in Munich and preserve jobs, and Linde agreed that there would be no forced layoffs until 2022.

Both companies also agreed that the deal would be described as a merger of equals, rather than an acquisition by Praxair.

The announcement comes amid a consolidation in an industry hit by declining energy prices and sluggish economic growth.

In December 2015, Linde agreed to buy respiratory health-care specialist American HomePatient Inc in order to expand a medical-gas business in the US, and in May, France's Air Liquide SA acquired Airgas Inc for about $10 billion, while in April, Praxair, acquired five small industrial gas businesses, which had combined 2015 annual sales of more $40 million.

Founded in 1879, in Munich, Germany, by Professor Doctor Carl von Linde, Linde became the world's largest industrial gas company by market share as well as revenue after it acquired its UK-based rival the BOC Group in 2006 for $13.9 billion.

Linde also designs and builds large-scale chemical plants for the production of industrial gases, including oxygen, nitrogen, argon, hydrogen and carbon monoxide, as well as large plants for processing LPG and the manufacture of olefins.

The company, which is listed on all the German stock exchanges and also in Zürich, has over 600 affiliated companies in more than 100 countries, with customers in the industrial, retail, trade, science, research and public sectors.

It holds 22 per cent of the world's market share in industrial gases followed by Air Liquide with 21 per cent, Praxair with 13 per cent, Air Products & Chemicals with 10 per cent, Taiyo Nippon Sanso Corporation with 4 per cent, and Messer Group with 1 per cent.

Praxair is the largest industrial gases company in North and South America, and the third-largest worldwide by revenue.

It was the first company in North America to commercialise separated oxygen, and the first to introduce the distribution system for liquid gas in 1917.

A merger between the two giants would attract scrutiny from antitrust regulators in North America and the European Union.