German media giant Bertelsmann SE yesterday said that it is in talks to buy the remaining 47 per cent it does not already own in Penguin Random House from joint venture partner Pearson Plc. 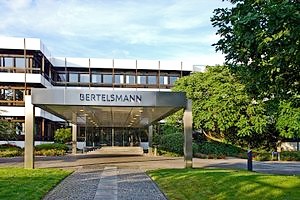 A successful deal would give Pearson about £1.2 billion ($1.5 billion), and allow it to use the proceeds to strengthen its balance sheet and return excess capital to shareholders.

Pearson said in a trading update yesterday, ''With the integration of Penguin Random House complete, and with greater industry-wide stability on digital terms, we intend to issue an exit notice regarding our 47% stake in Penguin Random House to our JV partner Bertelsmann in the contractual window, with a view to selling our stake or recapitalising the business and extracting a dividend.''

''We will use proceeds from this action to maintain a strong balance sheet; invest in our business; and return excess capital to shareholders whilst retaining an investment grade credit rating,'' the statement added.

In October 2012, Penguin group, renowned publishing brand owned by media conglomerate Pearson Plc agreed to merge its business with Random House, one of the world's largest book publishers owned by German media giant Bertelsmann in a deal worth approximately £2.4 billion. (See: Penguin, Random House in £2.4-bn merger pact)  At the time of creation of the joint venture, the combined companies controlled 25-per cent of the book business with more than 10,000 employees and 250 independent publishing imprints and with about $3.9 billion in annual revenues.

Penguin Random House is 53 per cent owned by Bertelsmann, while Pearson owns the remaining 47 per cent.

Bertelsmann, which has the right of first refusal for Pearson's share, said that it is open to increasing its share in Penguin Random House, "provided the financial terms are fair."

"Strategically this would not only strengthen one of our most important content businesses," Bertelsmann CEO Thomas Rabe said in a statement. "It would also once further strengthen our presence in the United States, our second largest market."

Based in New York City and with operations in 20 countries across five continents, Penguin Random House is the English-speaking world's top consumer bookseller, with annual revenue of €3.7 billion ($3.95 billion) and sales of 800 million books, e-books and audio books.

Pearson, headquartered in London, is the world's leading learning company, providing educational materials, technologies, assessments and related services to teachers and students of all ages.

Penguin has been facing stiff competition in recent times from online retailers and technology giants such as Amazon, Apple and Google which offer lower-priced e-books, as readers are becoming increasingly attracted to the new technology over conventional paperbacks.

The company yesterday slashed its dividend and warned that profits will likely underperform over the next two years.

Its 2016 operating profit was £630 million ($775.8 million) but revenue was down about 8 per cent due to weakness in North American higher education courseware.