German pharmaceutical and pesticides major Bayer AG has won approval in the US to buy agricultural giant Monsanto, a development that America’s family farmers say might mean higher prices and lesser choices for the farmers and the consumers. 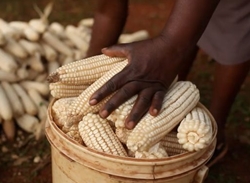 The US Department of Justice on Monday approved the German pharmaceutical and chemical group's bid to buy the US seed giant for around $62.5 billion, The Wall Street Journal reported.
The DOJ reached an agreement in principle with Bayer and Monsanto after the companies agreed to sell more assets, the Journal said late on Monday, citing people familiar with the matter.
With Bayer agreeing to sell off additional assets to alleviate anti-trust concerns raised by DoJ, the blockbuster deal between Bayer and Monsanto appears to be moving ahead.
But US farmers are worried about what the consolidation might mean for them and their future business.
The Organisation for Competitive Markets, which has fought on behalf of US family farmers to block the mega-merger, issued the following statement:“Today’s news makes it clear that our anti-monopoly laws are completely worthless and the US Department of Justice merger review process is pointless. Economists have well established that there is a strong likelihood of market abuse when four companies control 45 per cent of the market, and the fact that DOJ has now allowed one company to control 77 per cent of all seed corn, 69 per cent of all seed traits and 58-97 per cent of the markets in cotton, soybeans, and canola, means DOJ has just authorised a monopoly.
America’s family farmers will pay the price for this action, and consumers will see fewer choices in the market. Where is the justice in the Department of Justice?
Bayer and Monsanto had in September 2016, announced the signing of a definitive agreement under which Bayer will acquire Monsanto for $128 per share in an all-cash transaction. Based on Monsanto’s closing share price on 9 May 2016, the day before Bayer’s first written proposal to Monsanto, the offer represents a premium of 44 per cent to that price.
The combined business will benefit from Monsanto’s leadership in Seeds & Traits and Climate Corporation platform along with Bayer’s broad Crop Protection product line across a comprehensive range of indications and crops in all key geographies.
Together, the combined companies will have leading innovation capabilities and R&D technology platforms, with an annual pro-forma R&D budget of approximately €2.5 billion.
However, an overwhelming majority of farmers are concerned about the proposed Bayer-Monsanto merger and believe it will have a negative impact on independent farmers and farming communities, a poll released today has found.
According to the poll, of the farmers who responded 93.7 per cent are concerned about the proposed merger of Bayer and Monsanto (82.8 per cent are very concerned / 10.9 per cent somewhat concerned); 93.7 per cent of farmers are concerned that the proposed Bayer-Monsanto merger will negatively impact independent farmers and farming communities (83.9 per cent are very concerned / 9.8 per cent somewhat concerned).
The farmer’s top three concerns of the merger are 91.9 per cent of farmers are concerned that the merged company will use its dominance in one product to push sales of other products (79.6 per cent very concerned/12.3 per cent somewhat concerned); 91.7 per cent of farmers concerned that Bayer/Monsanto will control data about farm practices (79.5 per cent very concerned / 12.2 per cent somewhat concerned); 89.0 per cent of farmers think the merger will result in increased pressure for chemically dependent farming (77.1 per cent very concerned / 11.9 per cent somewhat concerned).
The poll also found a high level of concern amongst farmers surveyed that the merged company will control data about farm practices, will increase prices, diminish quality, choice and seed varieties, including availability of regionally adaptive seed, which farmers identified as critical given increasing climate variability.
The new poll, fielded by a coalition of farm groups, comes as the US Department of Justice is reviewing the merger between chemical giant Bayer and agrochemical giant Monsanto. If the Bayer-Monsanto merger is approved, the new company would be the world’s largest vegetable seed company, world’s largest cottonseed company, world’s largest manufacturer and seller of herbicides, and the world’s largest owner of intellectual property/patents for herbicide tolerant traits.
A white paper, prepared by the Konkurrenz Group, examines why the US Department of Justice’s Antitrust Division should not accept Bayer’s proposed divestiture and behavioral remedies. Relying on the survey findings and other evidence, the white paper examines why the likely complex behavioral and structural remedies will not likely restore competition in the seed, trait, and pesticide industries.
MORE REPORTS