Finance minister Pranab Mukherjee on Friday said that in order to have better coordination among regulators, the finance ministry has decided to establish a financial stability and development council. A discussion paper has been circulated in coordination with the Reserve Bank of India, he added. 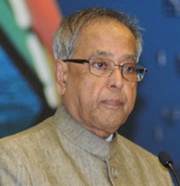 Mukherjee asked banks to focus on the weaker sections of society, saying that high economic growth sans benefit to the poor would not achieve the national goal.

Banks should expand their reach and contribute to inclusive growth as high GDP numbers without benefiting the poor remain just a statistical number, he said.

Mukherjee also cautioned against being complacent about the 8.5 per cent GDP growth expected this fiscal, and said the country must overcome the hurdles for double-digit growth. ''We cannot remain satisfied with this growth. We shall have to cross the barrier of double digit growth,'' he said at a Canara Bank function in New Delhi.

India's economic growth bounced back to 8.8 per cent in the first quarter of this fiscal after shrinking considerably following the impact of the global economic crisis in 2008-09.

Mukherjee said that there could be a gap of 30 per cent in the $1-trillion investment pegged for infrastructure during the 12th Five Year Plan (2012-17). ''We have to bridge that gap,'' he said.