HSBC under probe in India over tax evasion, money laundering

The income tax department has issued notices to global banking major HSBC and has warned of prosecution against its Swiss and Dubai offices for allegedly abetting tax evasion by four Indians and their families. 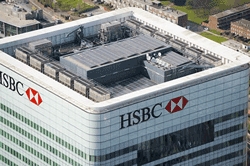 The tax authorities said they have "sufficient evidence" against HSBC's involvement in illegal activities even as a scrutiny by the Reserve Bank of India on the processes followed by HSBC's India unit has revealed a number of inconsistencies in the banking operations, including allowing a decoy customer to open a dubious account.

The UK-based HSBC, which also disclosed on Monday ongoing probes by tax authorities from various countries in connection with alleged abetment of tax evasion and money laundering through its Geneva branch, said it is cooperating with the relevant authorities and cautioned of "significant" financial impact as a result of these investigations.

India gained access to a leaked list of HSBC's clients of its Geneva branch from German and French authorities and the bank has been under the scanner of Indian tax authorities ever since.

This has helped Indian government's fight against black money allegedly stashed in Switzerland, in recent years amidst apprehensions that the illicit wealth might have been shifted to other places such as Dubai.

Similar lists made their way to tax authorities in various other countries, prompting probes.

Without disclosing the names of Indians who indulged in the alleged tax evasion through its Swiss or Dubai units, HSBC said while announcing its annual results that it had first been issued summons in February 2015 from Indian tax authorities, while fresh notices were issued in August and then in November.

The bank on Monday reported an increase in revenue from Indian operations to $1.84 billion in 2015, up from $1.74 billion in 2014. Its profits in India stood at $606 million, largely from global banking and market businesses.

HSBC reported a customer account balance of $11.8 billion for its Indian clients at the end of 2015, up from $11.7 billion in the previous year.

Meanwhile, an RBI report on the processes followed by HSBC's India unit is alleged to have revealed a number of inconsistencies in its banking operations, including allowing a decoy customer to open a dubious account.

According to the RBI report, a sample check of HSBC's outward remittances has found that the bank has breached the limits under the Liberalised Remittance Scheme, which allows Indians to open accounts abroad while at the same time limiting outward remittances at an annual ceiling.

The RBI report also alleged deficiencies in KYC procedures, including an instance where a decoy customer was able to persuade the bank to open a dubious account in September 2014.

RBI, however, did not disclose the names of individuals who had allegedly violated the remittance norms.

The UK-based bank has been under the scanner of financial sector regulators in many countries. In December 2012, the US authorities had slapped a fine of $1.9 billion on the lender for breaking US anti-money laundering rules.

HSBC, as part of its account statements, said it was ''fully cooperating'' with authorities, and warned that the resulting financial impact of the investigations globally could be ''significant.''