HSBC, the biggest bank in the UK, helped rich customers to dodge paying tax by allowing them to set up secret accounts in Switzerland, according to a recent report, The Independent reported. 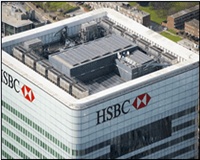 According to BBC Panorama, it had seen thousands of documents from the company's private Swiss bank which showed that some clients were able to hide money from HM Revenue and Customs (HMRC).

As a result of investigations by the HMRC, some £135 million in unpaid tax, interest and penalties had since been handed over by the UK citizens involved, it had been claimed.

The documents, stolen by a computer expert in 2007 and had now been leaked to the BBC and other European media, detail the Swiss accounts of over 100,000 people from around the world, including just nearly 7,000 UK citizens.

According to the programme, a French investigation had concluded that 99.8 per cent of the French people in the list had probably avoided payment of tax.

HMRC received the information in 2010 and decided that 1,100 UK residents had not paid enough tax. Only one tax evader faced prosecution in the UK, it added.

According Margaret Hodge, who chairs the House of Commons' Public Accounts Committee, she just did not think the tax authorities had been strong enough, assertive enough, brave enough, tough enough in securing for the British taxpayer the monies that are due.

The files, released by the International Consortium of Investigative Journalists (ICIJ), revealed that the Swiss arm of HSBC had around 500 clients linked to Australia, with 856 accounts, and total combined holdings of about $1.24 billion.

A client with Australia connections had accounts worth $A184.21 million.

It was not illegal for Australians to hold Swiss bank accounts, and there was suggestion any of the individuals had broken the law.