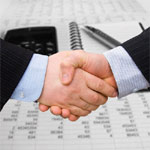 HSBC is to issue tens of millions of pounds worth of new shares to pay its top staff their bonuses, which would be immediately sold in the market to pay the cash component of senior executives' and bankers' bonuses to secure compliance with the demands of regulators.

The Bank of England has been asking banks to broaden their capital base to protect against future shocks rather than paying cash bonuses or dividends to shareholders.

With the payment of big cash bonuses through new share issues, HSBC would not need to pay bonuses out of its retained earnings, to comply with regulatory demands to make it stronger.

However, the move might end up stirring a controversy with shareholders as it would lead to a dilution of their investment.

According to analysts, though HSBC had not come out with any figures of the shares to be issued,  this would be clear when it brings out its annual report alongside its results at the end of the month.

Shareholders have been taking strong objections to executive pay, and as the new way of paying the cash part of bonuses would lead to a dilution of their holdings, it could further heighten the pressure on bankers to moderate their demands.