State Bank of India (SBI), which has grown fatter from acquisition of its subsidiaries, on Thursday said it would charge customers Rs25 on every ATM withdrawal, only to clarify later that the Rs25 charge applies only to its Buddy e-wallet customers. 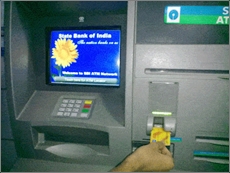 SBI will also introduce a new facility that would enable withdrawal of cash through ATMs using the bank's mobile wallet, but the bank would charge Rs25 on each such cash withdrawal.

SBI also withdrew an earlier notice to customers announcing a fresh Rs25 charge on all ATM cash withdrawals and clarified that there will be no change in ATM charges, which will continue as earlier.

"The service charge on cash withdrawal from ATMs has not been changed for normal savings accounts," a PTI report quoted SBI MD (national banking) Rajnish Kumar as saying.

The limit of four ATM withdrawals in a month only applies to the 'basic savings banks deposit account,' he clarified.

"If a customer has money in SBI Buddy, our mobile wallet, he can now withdraw that money through ATMs. Also, now customer can deposit cash or withdraw cash through business correspondent (BC) from or into our mobile wallet. These facilities were not available earlier," Kumar added.

SBI would also charge 0.25 per cent (a minimum of Rs2 and a maximum of Rs8) plus service tax on all cash deposits of up to Rs1,000 into its mobile wallet through business correspondents.

For cash withdrawal of up to Rs2,000 from SBI Buddy through business correspondents, the service charges will be 2.50 per cent of the transaction value (minimum of Rs6) in addition to service tax.

The state-run lender, sitting on the largest pile of non-performing assets among all Indian banks, is looking at new levies on customers to make up for its squeezed lending portfolio.

Besides, the bank levies a service charge of 3 per cent plus service tax using immediate payment service (IMPS) for fund transfer through SBI Buddy to bank account.

There will also be no service charge for exchange of soiled / imperfect notes of up to 20 pieces and value of Rs5,000.

The new levies will be effective from 1 June 2017, the report added.

SBI had in March announced new levies on non-maintenance of minimum balance, ATM and cash-handling.

ATM charges beyond the mandatory limit will be double - rising from Rs5 to Rs10. This, however, is still lower than other banks' ATM charge of Rs20 per transaction.

If the monthly average balance falls below Rs5,000 in savings accounts in metros, a levy of Rs100 plus service charge will be applicable. It seems the bank has taken off all zero and low-balance accounts.

In the case of debit cards, the charges will be Rs30 per quarter, where the average balance is less than Rs15, 000. The SBI group has about 220 million debit cards.